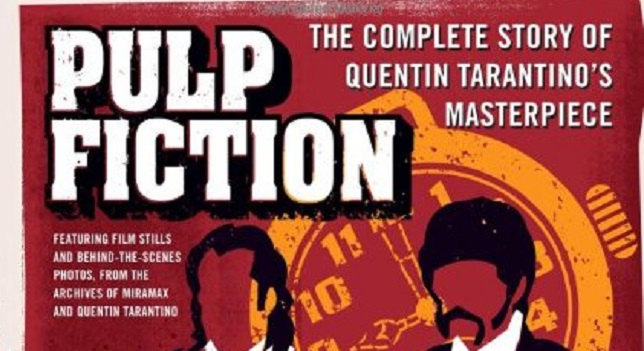 Pulp Fiction is still to this day a high ranker when it comes to public favorites with film. Tarantino’s noir thriller

What better way to start on the film than by looking at its creators past. Yes Tarantino is put under the microscope looking at his past, and more importantly his past history with film and the love he has for it, including a fun section looking at his favorite films. There is even a parallel drawn with other “Film Geeks” who became successful Directors.

Early chapters after the look at Tarantino, there is a focus on the writing, and a background to pulp works that help shaped the script. And from here for the most part the narrative structure of the book (unlike the film) is fairly liner. The making of the film is covered and it is followed by the release, the effect the film had at Cannes and then the aftermath of that and beyond.

Throughout the book there is various “Guest Essays” from writers and film journalists, putting their own input into the film, the music, the impact of the picture and the man behind the lens.

The most fun part is the fact boxes along the way, the fun diagrams, the stills from work that influenced this, the graphs that chart the cross-overs in his work, the map guides to Tarantino’s universe and the side stepping along the way that makes this is fun read and a visual delight to hold in your hands.

This is a packed book, brim-full of fun facts and is ideal for any Tarantinophile.