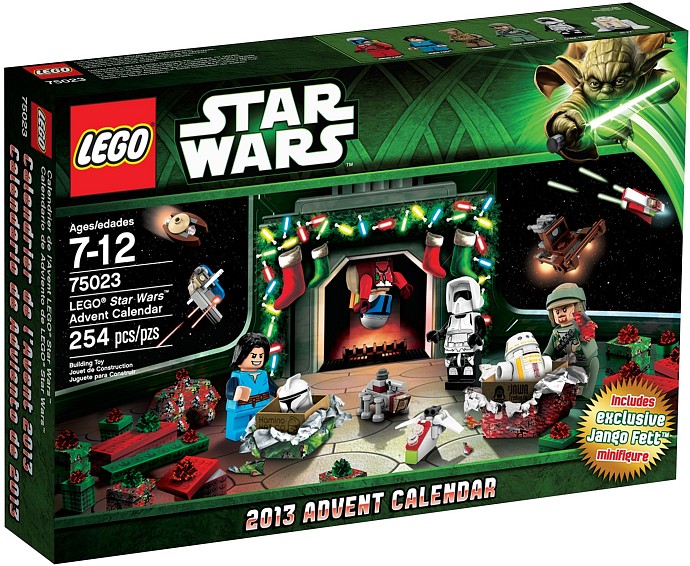 Lego have been making advent calendars since the late nineties but this is the third year of advent calendars dedicated solely to Lego Star Wars. For each advent calendar door we get either a minifigure or a mini ship build made up of around ten small pieces on average. The minifigures and Lego pieces come in small bags. The inside of the door has a simple diagram for building if needed, but there are no proper instructions included.  As expected of builds this size, they are very easy to put together though made up usually of the smallest pieces.

The mini ship builds are as usual very impressively designed considering their size. The ships depicted this year are mainly based on the prequel films as were most of the full sized sets released this year. To follow up on the new republic gunship release this year, the mini version has been included, making it the first ship that has been directly repeated as it was in the 2011 calendar. We also get Jango Fett’s Slave I which seems to be the same as Boba Fett’s Slave I from the 2011 calendar but with different colouring. The remainder of ships seem to be new designs of some of the more obscure vehicles from the Star Wars universe. Notable mentions have to go to the couple of original trilogy ships that are appearing for the first time, the Twin-Pod Cloud Car from Cloud City and the A-Wing star fighter from the final battle in Return of the Jedi. It was always inevitable that sooner or later some repetition would have to occur as there are only so many ships that exist in Star Wars. Let’s hope that next year we will get back to some more iconic ships again like the X-Wing, Millennium Falcon and TIE-fighters.

The minifigures included in the calendar again very much follow the large sets released by Lego this year. The standard battle droid has appeared in numerous sets for years now, but like the Clone Trooper included, you can never have enough of these in your armies. Surprisingly Lego did not release one standard Geonosian this year despite the heavy influence of the Battle of Geonosis in the 2013 sets. The figure is not unique though and has been released before in 2011. We did get their leader Poggle the Lesser in the Duel on Geonosis set (75017) so this one will go nicely together with him if you picked up that set this year. Incidentally, the FA-4 Pilot Droid is directly from the above mentioned ‘Duel’ set. The R5-F7 is an astromech like R2 D2. This particular version has also appeared once before in a 2012 Gold Leader’s Y-Wing Star Fighter (9495) set. The Scout Trooper comes from this year’s UCS release the Ewok Village (10236) as does the Endor Rebel Trooper, though technically he has a new face and is therefore unique to this calendar.

The two probably most exciting figures included are the Fett family. First we have the young Boba Fett for the first time since 2002 when like all Star Wars Lego he still had the typical yellow Lego skin colour. This is a very nice unique addition to a Lego Star Wars collection as well as an appealing character for children being one of the few young characters in the movies. Then we get Jango Fett in a christmas outfit. In each of the three years of the Star Wars advent calendars we have always got one seasonally dressed character. In the first year it was Yoda and last year it was Darth Maul. Both of these were wearing standard Father Christmas outfits. Jango on the other hand has a body consisting of his usual armour painted in red with some holly on the lapel and presents on his utility belt giving a really nice, comic detail to the figure.

The Lego Star Wars advent calendar is a superbly designed treat for fans of Star Wars or Lego. The ships and minifigures included are mainly related to the Prequel and the Clone Wars, but such is the joy of these little builds that it is hard to find anyone, young or old who wouldn’t want one to occupy themselves in the run up to Christmas. For £25 this is a nice little pre-Christmas present that just can’t go wrong!