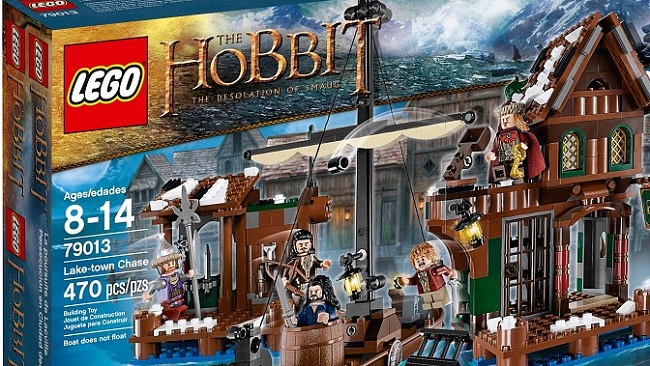 Lake-town or Esgaroth is the ‘floating’ town in Long Lake, south of the Lonely Mountain where Bilbo and the dwarves end up after escaping by floating down the river from the elves. This was shown in set 79004 Barrel Escape last year. Lake-town is depicted in the Hobbit as a small trading and fishing community which also curiously seems to be the only republic city state in Middle Earth, ruled by the elected Master of Lake-town. In the Hobbit, Lake-town ends up being attacked by Smaug the dragon and Smaug is finally killed in that battle by Bard the Bowman. It’s not quite clear what the ‘chase’ in the title of the set refers to, as there certainly is no such thing in the book. The cover art seems to suggest another prison escape with the included ship, but I certainly hope this is a theme added by Lego to make the set more dynamic rather than something that Peter Jackson and his team have added to the film.

The five minifigures included are a nice draw to this set. Bilbo is the same version as we got in last year’s sets, but Thorin Oakenshield is new, depicting him in a more casual shirt as opposed to the chain mail armour he was wearing in the Wargs set. The three Lake-town residents are a colourful bunch. Firstly we have the presumably generic Lake-town guard who is dressed up in purple and red clothes with some plate armour on the top. He also has a very nicely moulded and coloured helmet with metal, what looks like fur and  what I believe to be a new elaborate spear. The hero Bard the Bowman is a more subdued character, more in the style of Aragorn in Lord of the Rings, wearing a long brown coat with some fur lining and long black hair. Finally we get the Master himself as played by Stephen Fry in the up and coming film, wearing a very nice cape with purple on one side and red on the other. His clothing is very elaborate and he also gets a unique hat and long hair piece with a feather on top. As usual for these licensed sets the minifigures are top quality and all of them have front and back printing as well as leg printing on the three lake-town residents. Also, all of them except for the guard have double sided head printing for different expressions.

The build is very much the standard in recent play-sets of this size but with some nice finishing touches. We get two buildings and a long boat reminiscent of a Viking ship. The ship is ingeniously designed using two smaller standard rowing boats attached by the middle and the end result is surprisingly impressive.

The two buildings have the standard features of a small prison cell with (you guessed it) a breakable wall as well as a mini catapult on the roof, though at least there are no flick-fire missiles to be seen. The smaller of the buildings also has a nice secret door which can be opened using a mechanism on the side. The look of the buildings and in particular the main building is very nice though. Lake-town is built of wood and the set is faithful to this idea with the brown, red and green bricks used in a nice mix. The slanting roofs and ground have some white tiles depicting snow and lanterns give a nice wintery feel to it. Staying true to the book, both buildings are also built on wooden pillars with blue tiles below giving the impression of water underneath which works very well.

The build of the set is very simple apart from maybe the attachment of the slanting roof pieces which are a little fiddly. There are only a couple of small stickers included as well making the set very much young builder friendly.

The Lake-town Chase is a nice play-set with a pretty unique look due to the warm colours and the snow mixing with the water underneath. As mentioned, the town is also the location for the battle with Smaug so although we do not have a Lego dragon in the set, this could be a popular for children wanting to recreate the key moments from the new Hobbit film. For collectors, it has four unique minifigures which makes the set worthwhile for its price if you are a fan of the Lord of the Rings and Hobbit lines.