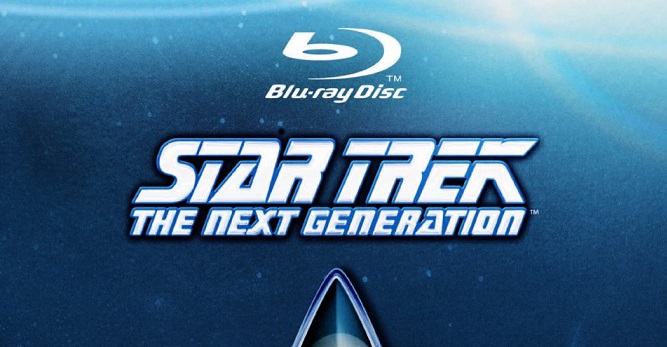 The year is 1991. Star Trek is never stronger than ever in both television as well as in film. It would be this year that the original crew would go on their final silver screen voyage in The Undiscovered Country. And on the small screen, Captain Picard and his crew are on their fifth memorable year. But what both of these have in common in 1991 is that they commemorate the death of Gene Roddenberry who sadly passed away in October of that year. A memorable year for Trek, a strong year, but ultimately with the saddest of tidings.

This new Blu-ray release of Star Trek: The Next generation Season 5 also spends a lot of it’s time commemorating Roddenberry, but it also pays tribute with its vast array of memorable episodes.

Right off the bat we get the second part of Redemption which closed the previous series. With Worf joining his alliances back with the Klingon high council and fighting the war to restore his family honour against traitors in their midst.

Setting the tone for season 5, things get right on with the episode Darmok (which now has become a tale to be told time and time again in cinema as well as in Star Trek). Not resting on their laurels, Ensign Ro is next up which introduces a fan favourite from the series played by Michelle Forbes. Forbes would be no stranger to science fiction be it on television (See Battlestar Galactica for a stand out performance) as well as in film. But it all started here with the very troubled and brittle Ro Laren to be seen throughout the season.

Characters are one part of the universe, the science fiction is obviously another. Silicon Avatar sees the appearance of the Crystalline Entity, The Game finds the crew becoming addicts. I, Borg finds new humanity appear within the Borg, which of course puts Picard in a personally tricky situation when it comes to dealing with this encounter. But as far as encounters go, none are quite so famous as the one they have in the Unification double episode with the appearance from Leonard Nimoy as Spock.

Nimoy may be Star trek royalty to have on the show. But they haven’t forgot about their own cast members from the past as Denise Richards returns, but this time as Sela, the half Romulan child of of Tasha Yar. And also The First Duty sees the return of Wesley Crusher.

The show gets much more reflective towards the end of the season as The Inner Light sees Picard live a lifetime in the blink of an eye before the shows goes out on the first part episode of Times Arrow which finds time travel making a return.

Paramount have added a few bonus extras this time round as well as what was available from the DVD releases previously.  First and foremost the picture and sound quality have been improved. It may take a short moment to get used to the pan and scan format that the show was shot in. But at least there is more detail on screen.

There are various featurettes on the overall content of the fifth year, the production, the visual effects, promos, alien speak and even a nice tribute to Gene Roddenberry. There is also a gag reel, a feature length interview with the three composers of the series, and a two part remembrance of the series.

A lot of the opinions come from regulars from cast and crew. Brannon Braga and Ronald D Moore from the writing team are to be found in various places and are always good value. There are also a handful of commentaries on some of the episodes featuring the Denise and Michael Okuda, Moore, Braga and even the likes of fan Seth Macfarlane.

Over all a decent enough package to get people on board with the HD transfer and release.