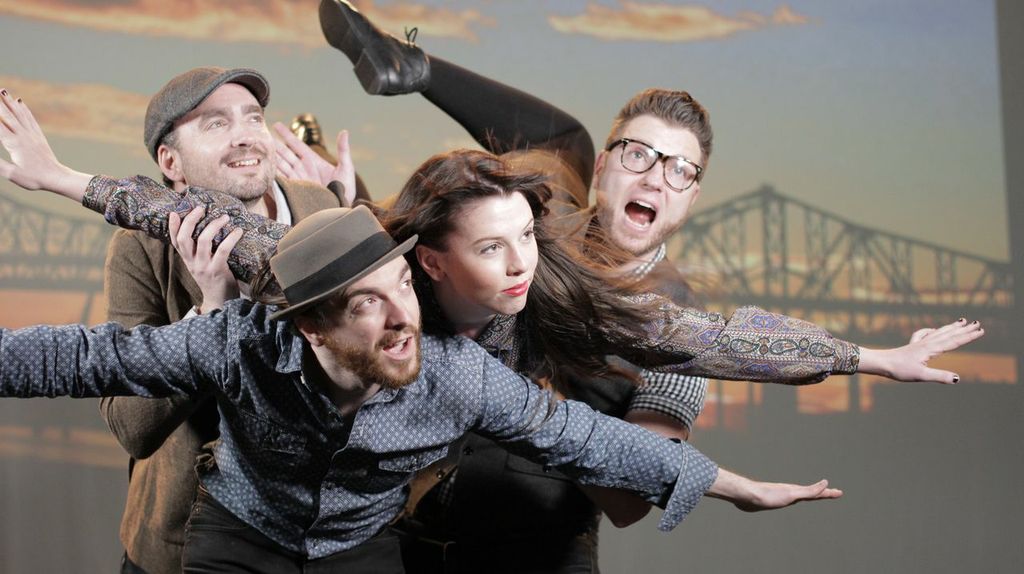 We like Boston-based alt-folk-rock crossover gang Air Traffic Controller for a myriad of different reasons, but most notably we were drawn to their backstory – after serving in the US Navy as a real-life air traffic controller, singer/songwriter Dave Munro sent home 4-track demos he had written and recorded during his deployment. With his enlistment up, Munro returned to hometown Boston and discovered an impressive number of fans, prompting the formation of the band. We caught up with Dave and fellow bandmember Steve Scott to find out more…

Glasswerk: Let’s get this out of the way now – why the career change from Navy Air Traffic Controller to rock band?

Dave Munro: When I was in the Navy, I was having the time of my life, but I often had a feeling the fun wouldn’t last much longer. Every 2-3 years my friends were getting orders to transfer and work somewhere else for the next few years. Some of them loved this way of life, but it’s not for everyone. I missed my loved ones, I was making music and wanting to pursue it. I had to get the hell outta there. As soon as I got home my brother and I built a recording studio in his basement and set our sights on being a band.

Glasswerk: Were you surprised by the natural ground swell that the material you’d been beavering away on in secret had gathered?

Dave Munro: Yes, totally surprised. If I had sent home demos and people didn’t react so positively, I think my future would’ve been completely different. I was still pursuing the real life ATC career after I was out of the navy. I earned my degree and had an opportunity to go work in a control tower in Portland. This offer came around the same time I wanted to make a record. I couldn’t do both. I based my decision on how much I loved connecting with music listeners. They truly changed my course.

Glasswerk: You’ve got quite a unique sound but we’re hearing a bit of The Strokes, Rilo Kiley, some Postal Service and even a bit of The Boss in there – what are some of your big musical influences?

Dave Munro: Springsteen is actually a major influence. The way he tells a story, and speaks to listeners like they are his pals, so inspiring. I feel the same way about Paul McCartney, Johnny Cash, Tom Petty, and some more obscure artists like Mason Jennings, Damien Jurado, and folk rockers Delta Spirit.

Glasswerk: Was this your first trip to the UK? Have you seen anything that’s totally blown your mind yet, like red post boxes or our tiny stupid cars etc?

Dave Munro: Yes, it was our first trip to the UK. You know what happened that kind of blew our minds? … we were detained for 7 hours by the UK Border Force. It was all a mix-up, the folks that locked us up could not have been nicer about it, but still, that blew our fucking minds!

Steve Scott: Obviously the amazing history and architecture are pretty mind-blowing. I also think we needed a bit longer than a week to get used to the cars driving on the left. Most of us were in grave danger every time we crossed the street.

Glasswerk: Can you tell us a bit about what some of the tracks from NORDO are about lyrically? Which is your favourite?

Dave Munro: ‘Hurry Hurry’ is sort of a day-in-the-life of someone so busy that they are losing sight of what matters most to them. It’s totally personal, and heartfelt, yet so upbeat, it’s a favorite for sure.

‘You Know Me’ is straight forward, about 2 people that really understand and just like each other fully. I love singing with Casey Sullivan on this track. Did you know her voice can cure the common cold?

‘Pick Me Up’ – written post-breakup. It’s about a miserable state of mind, and then the moment where everything takes a turn for the better. Some reviews of NORDO say that our music just makes their day a little bit brighter. That really means a lot to me.

Steve Scott: I’m really proud of how broad and colorful this album is. Every track is pretty unique sonically– with instrumentation that varies from acoustic to electronic to orchestral. I think it’s Dave’s voice and the storytelling that ties it all together nicely.

Glasswerk: It was funded by kickstarter – can we assume that you’re all for crowd sourcing these days? Positive experience?

Dave Munro: Yes and yes. We owe our Kickstarter Backers everything. We’d still be in a basement chasing our tails if it weren’t for those believers.

Steve Scott: Really positive experience with Kickstarter. We were truly humbled and taken back by the support and generosity of our fans. Fan funding allowed us to be more ambitious with NORDO and made the album better in the end.

Glasswerk: Any plans to return to the UK in the near future?

Dave Munro: I believe we’ll definitely be back. Near future?.. I hope so. It depends on many factors. We need some stars to align, and the kind of support we’re getting right now in the UK is key, please keep it up!

Steve Scott: As soon as possible! We had a fabulous time and I think we took some really positive steps toward making a presence in the UK.

Glasswerk: Have you got any phobias?

Dave Munro: I’m afraid of stepping in dog shit when I’m barefoot. Wait.. is that a phobia.. who isn’t afraid of that?

Steve Scott: I’m a little afraid of heights if I’m climbing a ladder or something rickety. Understandable right?

Dave Munro: I’ve said a lot of dumb things onstage to our audiences, I don’t know what’s wrong with me. Recently I called a crowd of Union Workers ‘pussies’. I’m going to get this band killed someday, sorry gang!

Steve Scott: Got in a taxi to go to my hotel that was a block away.

Glasswerk: Do you have a favourite aeroplane?

Dave Munro: I was lucky enough in the Navy to have flown in all kinds of aircraft. I rode on a C-2 “Greyhound” and landed on an aircraft carrier in the middle of the Caribbean. We sat backwards in it, which was weird. I was only on the ship for a couple days to assist in briefing some pilots. Afterward we were ‘catapulted’ off the carrier on the same plane and flew back to base. It was one of the coolest weekends of my life. Ok it’s actually not my favorite airplane, they’re butt ugly. The C-5 Galaxy, the biggest plane in the US Air Force, now that’s my favorite. It’s amazing something that big can get off the ground.

Glasswerk: Has anyone ever done an un-solicited flyby of your control tower like Tom Cruise in Top Gun? He’s such a rebel.

Dave Munro: No. We had an air show at our airfield where the Navy Blue Angels performed, but all those flybys were encouraged. Yeah Tom Cruise is a bad ass.