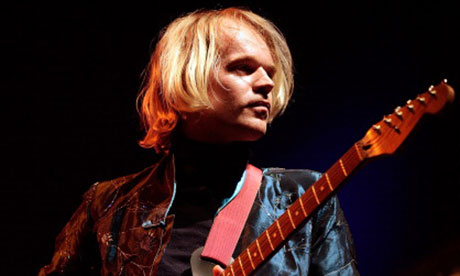 King Tut’s is the most rammed I’ve ever seen it; audience anticipation for the enigma that is Connan Mockasin is feverish. Mockasin takes to the stage telling us he’s been so excited he hasn’t been able to sleep.

Perhaps this accounts for the ramshackle nature of the opening, but the audience are only too happy to be enlisted to provide swooping backing choruses for Faking Jazz Together. That title is indicative; how much of Mockasin’s ethereally beautiful music is for real, and how much is prankster schtick? While it’s all as chaotic as you’ve been warned a Connan Mockasin gig can be, he settles down into an absolutely sublime version of It’s Choade My Dear, the blessed-out pastoral psychedness of which has a young man I know reduced to tears. Next the band segue into Forever Dolphin Love, where he manages to pull off the sublime then veer into the ridiculous in the space of one song, as Mockasin and band, realising that one of the greatest songs of the last ten years is nine minutes long, speed up tempo half way through and do it in comedy double time, complete with chipmunk vocals.

Mockasin tells the audience that he loves schizophrenia; this is certainly perhaps the most schizophrenic gig I’ve ever seen. He morphs into a cracked Rn’B singer, there are eruptions of comedy hair gel, imitations of Japanese groupies, and we’re into the world of Caramel. I’m the Man Who Will Find You finds him serenading the crowd, and a girl undressing, a dress flying across the stage. This is perhaps fittingly topped by a gorgeously sleek version of It’s Your Body 4.

When the band leave the stage and he tells the crowd he might be too tired for an encore, it looks there could be a mini riot. He tells the audience he was right to be scared of Glasgow, then next minute is sitting on the floor amongst them serenading them with Roll With You, with the crowd eating out of his hand.

Mockasin has talent to burn, and boy, does he know it. God knows what he’s going to do next, or who he’s even going to be next, but the man is incapable of being boring. I’m still not sure if perhaps Mockasin was asleep all along and dreamt this gig; or maybe I did.