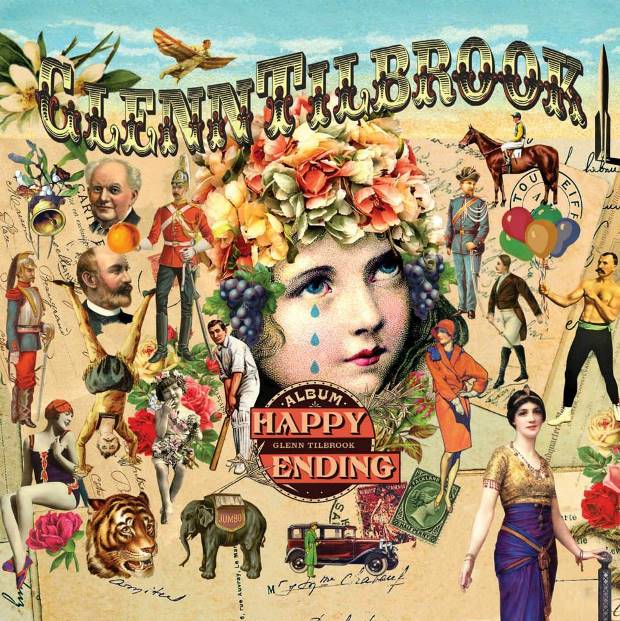 Happy Ending is the fifth solo album from Squeeze frontman Glenn Tilbrook, and this time it is an all acoustic affair. Recorded in Tilbrook’s own studio, 45RPM in Charlton, London, the album has twelve tracks that showcase his typically smooth vocals well. The standard of songwriting is as good as you might expect and a varied cast of characters are created in what is a satisfying and sometimes quirky affair.

It’s not all just Tilbrook and an acoustic guitar though. There are many varied and interesting instruments and effects on show – kazoo and sitar turn up as well as Moroccan hand drums and xylophone. And one track was even co-written by ten year old Leon Tilbrook and features him and Wesley Tilbrook (aged seven) on vocals!

Opening track Ray starts the album with a slow and tender lament that could have come straight from the Squeeze back catalogue, before the epic sounding Persephone heads in a totally different direction. Much more strident vocals and a string accompaniment that builds into a full orchestral swell make this a stand out track.

Dennis is also very good, a tender lament for Beach Boy Dennis Wilson. Bongo Bill has a lovely childish innocence, the family affair almost a nursery rhyme written with humour. And Kev and Dave, the story of two brothers who run a pub together is beautifully written, the characters created lively and interesting.

There are also a couple of songs with a more political feel. Rupert satirises the Murdoch empire and phone hacking, name checking Rebekah (Brooks) and James (Murdoch) as well as the man himself. Everybody Sometimes sees big business in Tilbrook’s sights as he hits out at the unaccountable nature of its operations.

Glenn Tilbrook may be best known as the voice of Squeeze but his solo work is well worth exploring too. This album is lively and at times a little unusual, but always expertly crafted and delivered. Tilbrook has a deft lyrical touch, and the vocals are of course beautifully delivered throughout.