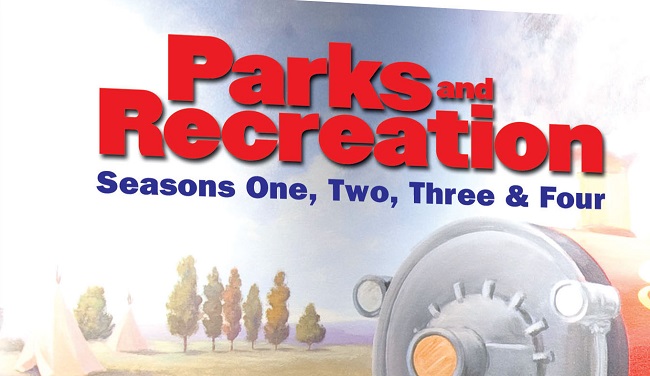 Starring Amy Poehler, winner of this year’s Golden Globes Best Actress in a TV Comedy Award for her portrayal of Leslie Knope, and Rob Lowe (West Wing, Austin Powers, Wayne’s World) Parks and Recreation  Named No 1 TV show of 2012 by Time Magazine, the multi-award winning No 1 hit US comedy series is now in it’s Sixth Season on US television. Having aired Seasons One and Two, Seasons Three and Four will be broadcast this year on BBC4.  It has a massive IMDB Rating of 8.5/10.

Guest Stars include, Will Arnett (30 Rock, Arrested Development) as Leslie’s blind date, Emmy winning stand up Louis C.K as the local cop, Will and Grace’s Megan Mullally as Ron Swanson’s manipulative and over sexed ex-wife. (Megan is married to Nick Offerman who plays Ron Swanson in real life), Paul Rudd (Knocked Up, The 40-Year-Old Virgin, Friends) as Leslie’s Pawnee City Council opponent and Will Forte (Saturday Night Live) as the resident who passionately argues for the Twilight books to be included in the Pawnee time capsule.

SEASON ONE The saga of Local Government employees attempting to turn a neighborhood hole in the ground into a new public park.

SEASON TWO Indiana’s most enthusiastic public servant marries gay penguins, welcomes a military regime from Venezuela, hosts a 36 hour telethon and takes on Ron Swanson for Woman Of The Year.

SEASON THREE With the complete shutdown of the Pawnee government for budgetry reasons, dedicated government employee Leslie Knope and her colleagues plan their most important project yet: The Harvest Festival. Other series challenges include saving a painting depicting Leslie as a bare-chested Greek goddess and most importantly, the search for Pawnee’s missing beloved miniature horse Li’l Sebastian.

SEASON 4 The ever-enthusiastic Leslie Knope has her sights set on the City Council, but political campaigns are never easy – Leslie must deal with shady journalists, a deep- pocketed opponent, a still smitten old flame and even suspension in her quest to serve her beloved hometown.

To mark the release we have two sets of Parks and Recreation Seasons 1-4 box set to give away. To be in with a chance have a peek at this question:

B) The Secret Life Of Walter Mitty

Please send your answer along with your postal address to editor@filmwerk.co.uk

This competition closes on 10th March.

Parks and Recreation- Seasons One, Two, Three and Four: 12 Disc Box Set is out on DVD on March 3rd.