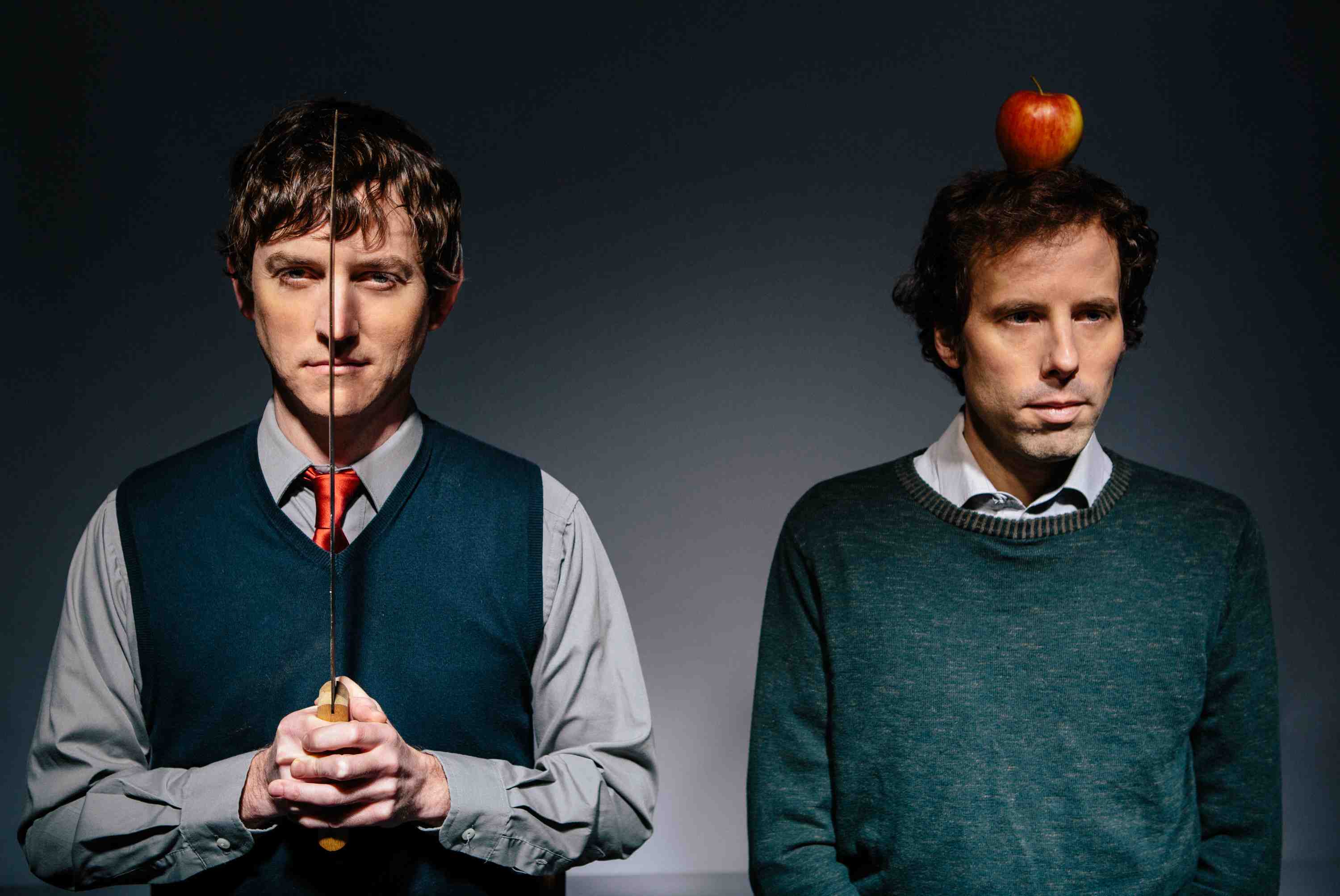 Portland’s Ages and Ages release a new single, I See More, on 24th March. Taken from the band’s brilliant forthcoming album, Divisionary (also 24th March), the single release follows Ages and Ages’ recent London debut at The Islington on 19th February. Glasswerk took this opportunity to catch up with the two piece.

Glasswerk: Your upcoming album is called Divisionary – What made you come to that name for the record

Rob: It is a word we made up to describe what we saw as the main theme of the record: the act of splitting off from harmful influences and values, and how the process of breaking free from all the bullshit creates division, dissent, and separation. This happens in personal and societal ways…taking a stand for whatever seems right can drive a wedge between you and loved ones or the culture you live in.

Glasswerk: How would you describe the sound of Divisionary? Is it similar to Alright You Restless, or vastly changed?

Rob: The records come from similar musical places, in that we are still using a lot of group vocals and raw, organic sounds. Both records intentionally sound more or less like a band playing live in a room. This time we pushed that to a further extreme, using a lot of binaural micing and other tricks to really pull the listener into the room with us all playing and singing around them. This record is a bit more hi-fi. Kevin Robinson actually mixed AYR to cassette tape to emphasize the demo-like rawness. This one was run through a pretty top-notch analog signal chain.

Conceptually, “Divisionary” has some darker themes than the first record – or at least comes from a more world-weary place. It also feels a little more centered on a consistent narrator. It’s more intimate lyrically, so it made sense to focus the production on Tim a bit more.

Glasswerk: What do you have in store for us on this EU Tour?

…Or maybe it will just be us on a little stage playing our instruments and singing our guts out…either way it should be a good show.

Glasswerk: What is it that inspired you to write the songs on Divisionary? Are there any bands/acts you looked at and thought “I want this record to sound like that”?

Tim: We all listen to a ton of music, but around the time we started to talk about recording, a few of us had Exile on Main Street on serious rotation. Like Rob said, we wanted a roomy, raw, live sound. And that record really captures that vibe in a magical way. We weren’t looking to replicate the production…but we wanted to capture that type of raw energy!

As far as what inspired the actual songs on Divisionary? A lot of us were going through some pretty tumultuous times and I felt inspired by the strength I was seeing in my friends…their will to work through all that sadness and negativity, to learn from it, and to still stay positive and keep the love in their hearts. This was a great source of inspiration for all of us I think.

Glasswerk: The music video for ‘Divisionary (Do The Right Thing)” looks amazing and has a really nice theme to it – is this something you really wanted to do? Have you ideas for other videos you might do?

Tim: Hey thanks! When I was younger, there were a lot of bigger kids in the neighborhood that used to freak us out and act like assholes. I’m sure they were just recycling whatever abuse they were experiencing in life. Anyway, I always used to imagine some awesome revenge scenario. But there’s a difference between a knee-jerk reaction (even if warranted) and a more subdued realization that acting it out only continues the cycle and makes you one of them. Of course, I wasn’t privy to this as a kid, but we wanted the video to show both sides of that division: those who lose themselves in the pursuit of progress and become part of the negative cycle, and those who don’t.

We have a few more ideas for videos and we intend to see them through right after we find a briefcase full of cash.

Glasswerk: After the release of Divisionary this March, do you think we’ll see you again this year? Are there any festivals you’d like to hit in the UK/EU?

Rob: Absolutely. We plan on coming back as much as possible, or at least as much as we can make work logistically. It’s great over here. You people are really too damn nice. Seriously. We even like the food.

Glasswerk: Anything else you’d like to say ahead of your album release next month

Rob: Let’s all be kind and honest and wise and own up to our mistakes and eat local food and get enough sleep and reform political corruption and play fetch with the neighbors’ kid and cuddle with our pets and make sweet love and give foot rubs and listen to inspiring music and end corporate welfare and free the dolphins at Seaworld and otherwise fuck up the stupid, greedy, image-obsessed, short-sighted, power-worshipping mainstream culture which tries unceasingly to numb our minds and spirits. Also, buy our record so that we can eat. Thank you.

Ages and Ages first came together in 2009, founded by Tim Perry, Rob Oberdorfer, Graham Mackenzie (percussion, vocals), and Daniel Hunt (drums, percussion, vocals), alongside other friends and players from Portland’s ever-fertile music community. Their US debut, Alright You Restless arrived two years later and an ardent audience surfaced, a committed cohort that included Barack Obama, who included (without permission, mind) the album’s “No Nostalgia” on his 2012 campaign playlist.

Having spent much of the subsequent two years in willful isolation following barrage of unhappy events that befell some of the band members in the period that followed the release of their debut (a brief span saw the loss of a mother, a father, a sister, three grandparents, and two very dear friends, with causes ranging from freak accident to suicide and cancer), Ages and Ages have emerged with an emotive and emotional song set that sees a band wrestling with many of the contradictions and confusion that life has to offer. With between six and nine members at any given time, they spent the best part of a year making the album at Portland’s Jackpot Studios with veteran Pacific Northwest producer Tony Lash (Elliott Smith, The Dandy Warhols, Eric Matthews) and at bassist / percussionist Rob Oberdorfer’s own home setup.

Ages and Ages have tackled the personal challenges following Alright You Restless, by amping up their multi-layered modus operandi – all gang harmonies, rhythmic discovery, and inner conflict – the contrast between joyous sound and disheartening subject matter instilling songs such as No Pressure and Our Demons with striking pragmatism and undeniable muscle. Fraught with heartfelt drama, celebratory spirit, and sonic ingenuity, Divisionary shows a band torn and frayed but optimistic, empowered and transcendent in spite of their turmoil and trials.