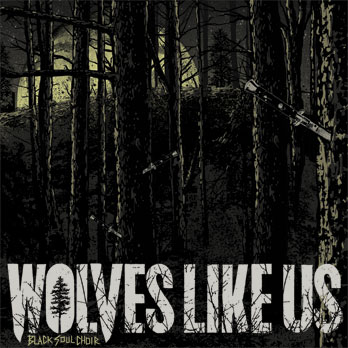 Hailing from Oslo, Norway, post-hardcore quartet Wolves Like Us pack a meaty punch with second album Black Soul Choir. A follow up to 2011’s debut Late Love, the time in between has been spent touring the arse off Europe several times, hooking up with fellow European noise makers Kvelertak and Junius and also taking in a bunch of festivals, including Belgium’s Groezrock.

Black Soul Choir offers 11 tracks of interesting dark alt rock, but just head-noddingly catchy enough to pull out a hook or two as well. Influenced by the likes of Quicksand, Husker Du and Hot Water Music, the band do sound like all three in places (vocalist Larsh Kristensen not sounding unlike the latter’s Chuck Ragan). For me, there’s also a clear nod toward the likes of Cave In and Helmet, which is definitely a good thing, especially on tracks such as I Don’t Need To Be Forgiven, whilst the interesting When Will We Ever Sleep has a more solid metal groove in between syncopated rhythms and an awesome lead guitar riff, and backing vocals with more than a whiff of Sad But True era Hetfield and Newstead about them.

Recorded and produced by Mike Hartung at Propellor Studios in Oslo, Wolves Like Us have benefitted from the experience of a man who has worked with everyone from A-Ha to Satyricon. They haven’t been afraid to be ambitious in the studio either, with Your Word Is Law combining some great FX with another awesome vocal performance and off-kilter riff and drum arrangements.

The hook heavy Dig With Your Hands has an Atreyu vibe about it, almost verging on nu-metal in the industrial-meets-pop guitar sound. A standard issue acoustic number follows – Lovescared and it’s a little stock for me personally, and the second guitar is either out of tune or not mixed properly, and sadly the track feels like an afterthought as a result. Even the anticipated arrival of drums, more instruments and plenty of ‘whoaaa’ backing vocals doesn’t stop me wanting to skip before the end. On repeated listens however this becomes less so, and it does break up the record effectively, if predictably.

The guys show they can pull off American radio-ready rock as well, on penultimate track We Were Blood, before album closer Thanatos Wins Again brings us back to business with an epic heavy post-rock groove and space for each member to demonstrate their admirable craft.

Black Soul Choir is an enjoyable listen that should sit well with fans of most heavy and alternative rock. You won’t be hearing it on Radio 1 anytime soon, nor will you be belting out any of their choruses in the shower, but if you like your guitars dirty and drums grooving with a quality vocal, Wolves Like Us might be your new favourite band. Interesting stuff!