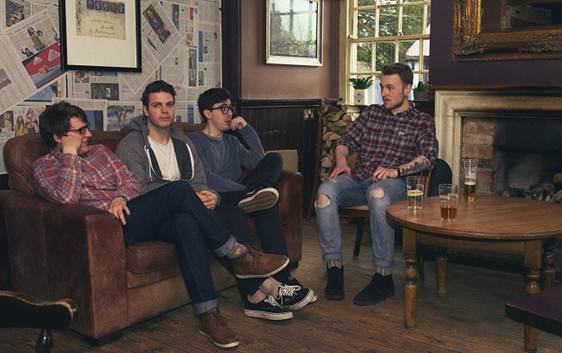 A Quick Chat With Yearbook

When we first started playing music… we sounded bloody awful. Our first practice was with two 15 watt marshall combo amps, so you couldn’t hear the guitars at all over the drums. Thankfully now we have much bigger amps, so now everything is unbearably loud, not just the drums.

The first time we met each other we… were at a local show that I (Andy – Guitar and Vocals) was promoting and Hamish (Drums) was playing at with his old band. Everything was running late so I told Hamish that his band had to cut some songs from their set. They decided instead to try and play all their remaining songs at double the speed. It was….interesting.

We knew we were on to something when… people started to download the original EP en mass. We just sort of put it out there for free download in the hope that we would get a few shows from it and people who already knew us would enjoy it. Now its had something like 5000 downloads all around the world. It convinced us that we if we worked hard enough we could get to the point where playing shows outside of our hometown was a regular occurrence and not just a one off.

Our biggest influences are… many and varied. They include Thrice, Jimmy Eat World, Brand New, Biffy Clryo, Radiohead, Cult of Luna. Just everything that we have listened to since day one really. Even unusual stuff like Genesis, David Bowie, George Michael and Michael Jackson. We all love really well written songs, even pop songs, so we like to think we are just influenced by good music more than anything.

We’re most proud of … Our latest release ‘Old Bones’. For a long time we were not sure it was going to see the light of day so to finally have it available to people both online and as a real CD that you can hold in your hands is an awesome feeling.

Our ideal support slot would be with… Nirvana in their prime. Just so that we could play a set and then watch them, even if it would make us feel a bit inferior. Worth the dent to our egos.

One item we can’t live without on tour is… Asda’s own brand ‘Choco Squares’ Cereal and Banana Soreen. They can be eaten at any time, anywhere. Essential supplies for a hungry band. That and good sleeping materials. We really couldn’t stress that enough. Once you’ve slept on the floor for one night you quickly remember to bring some sort of padding. Bruised hips are not the one.

We can’t stop listening to… Citizens album ‘Youth’. It took a couple of proper listens to get into it, but it has now become a firm van drive favourite. Normally in the van it features additional Yearbook backing vocals.

We’re not ashamed to admit that… We all love Coldplay. No Shame. No regrets. Incredible band that are always trying to better themselves both in song writing and live performance.

Catch us next… supporting Johnny Foreigner at The Star in Guildford on the 29th of March.