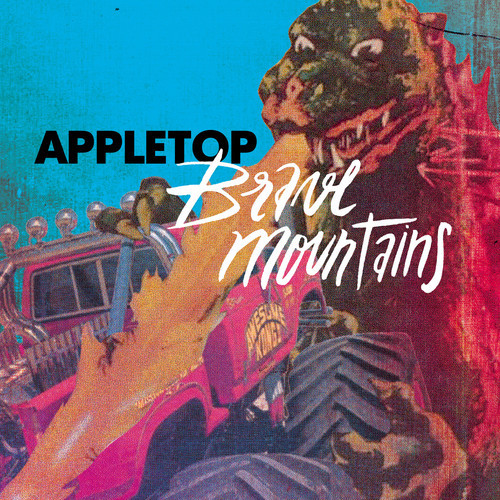 When you think of rock music from the South it’s usually the southern part of the USA. But think again. Appletop are a trio from the south of France and their second album Brave Mountains, released through Glasgow’s Armellodie Records, shows that there is good rock music in continental Europe too. It is full of big guitar buzzing indie sounds that thrill, and there are a couple of very decent slower tracks too.

Pierre Cristofari, Olivier Cancellieri and Nicolas Faou formed Appletop in Hyères on the Côte d’Azur in 2008. After releasing several EPs and touring relentlessly, their debut album The City Can Wait was released by Parisien label Le Son du Maquis/ Harmonia Mundi in 2010. More touring followed and over the past two years the ten tracks of this second album were put together.

Brave Mountains comes in at just over half an hour long, so there is no bloat here. The songs are all tightly focussed and energetic with plenty of great hooks and big choruses. The bass is prominent in the mix, anchoring the sound with great power, and it is noticeable that Pierre Cristofari’s lyrics show no trace of a French accent.

The lively Headstrong and lead single Twenty-Five open the album in some style and a feel of laid back, fuzzy contemplation comes through. Burning Land sees the temperature turned up as a more rock guitar sound dominates over a great bass line. The drums pound and the powerful vocals are full of emotion. The lovely acoustic Nikolai heads in the opposite extreme, still emotional but with regret permeating the gentle vocals. New Again sees the power ramped up once again in a track that mixes slow vocal phases with massive riffs and the overall effect is striking.

Johnny’s Theme and Nebraska both use a similar structure with the vocals coming between the guitar parts, and it works well. The powerpop sound of Madonna In Love features a nice short guitar solo before the slower and melodic opening to Portland. But the track bursts into life beautifully and unexpectedly, turning into another intense rocker. Somehow We Got Lucky brings things to a close with a fast paced burst of energy and again uses change of pace well, with a soft middle section before the big ending.

This is a short album, but the effect is really that less is more. Not a second is wasted and while there is nothing revolutionary or unique about the sound, the overall effect is of an upbeat indie rock band that knows exactly what it is doing and does it well. Appletop was a new name to me, and I’m very pleased to have discovered the band.