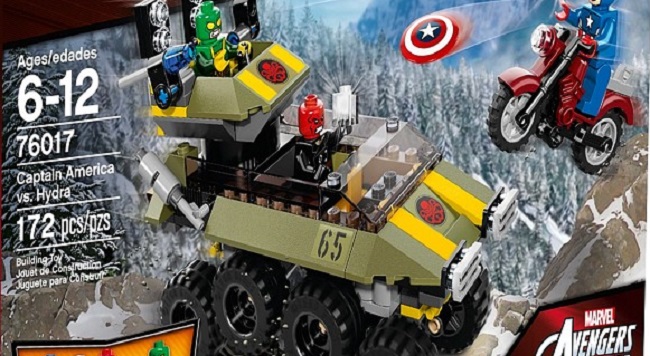 Captain America is back in theatres this very month in Captain America: the Winter Soldier. Any fan should know by now that Cap is pretty much the leader of the Avengers and was the first member of the team recruited to work for Shield.

But that is present day! Back in the era of World War II, Captain America fought for his home country against namely Hydra, an evil organisation intent on taking over the world and purifying it for its own needs.

Captain America was at one point frozen in time and thawed in modern day America where he went on to work for Shield as Hydra still very much existed!

The Captain America mini-fig is back with his shield in tow. Interestingly it is a similar design as his first LEGO Marvel incarnation a couple of years back where his head encompasses the helmet as well, instead of getting the helmet as an add on to dress the character with. The only down side is that next to his Avenger pals his head can look a bit tiny.

Red Skull almost makes an appearance here – and as probably the Cap’s number one foe – he’s quite the addition to have. Aside from this the only other mini-fig is a Hydra henchman – looking very much like a henchman mini-fig. So 3 figures in a 20 quid set isn’t bad going!

As for the vehicles we get the Captains Bike which is probably the most simple build we have seen in a while as it is literally a few pieces, with a main underside and shell composing of the majority of the bike before you pop the wheels on. This should not present any issues for beginners.

More complicated is the Hydra battle vehicle which come with working suspension and articulated wheels. Working from the middle of the vehicle outwards it’s a relatively quick build, but does offer more dimensions such as a turret and the aforementioned eight wheels underneath. Top it off with a few Hydra stickers and flick missiles and you are good to go!

This is a fun and worthwhile set as you not only get at least two stand out mini-figs for Marvel but also the caps bike and a fairly complicated yet mobile bad ass vehicle for the bad guys. So for the money going that’s not too bad. Plus as we mentioned the more mini-figs per set the happier we are and this one comes with 3 which should keep collectors happy.

The only downside is that this set has nothing to do with the actual films themselves really (Certainly not the new film). What we need then is some Falcon and especially Winter Soldier action going on without mini figs! We have dreams of a large Helicarrier set that comes with at least 10 mini-figs one day. We can dream!