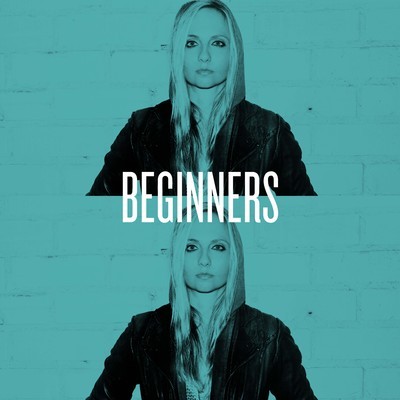 It is a joy and even something of a relief that Samantha Barbera, songwriter and singer/bassist of punks Holy River, and producer Nick Ruth reunited. Beginners, the tongue in cheek choice for a couple that clearly know what they are up to and do so well together. The immediate product is an eponymous, five-track EP, which on occasion makes me feel like a gooseberry. It is right that these two are making music together again.

They could have got a room, but instead they offer, on Ever Love, instant melodrama. Barbera sings of her embroilment in a relationship and “would rather die than watch as you go… It couldn’t have been all in my head. There in your arms; lost in our bed.” Ruth neatly and expertly wraps the electronic tweaks and whimsy around some rather heart-tugging lyrics. Barbera’s voice syncopates so well with the electronica that the hook is instant.

Who Knows sounds awfully like something that Electric Guest would produce, although maintains an air of the maudlin. A yearning look into the future, this is a lovely yet frail ode to love. All possibilities remain open in Barbera’s lyrics: “We could both be stars, who knows; we could fall apart, who knows.” Ultimately they could have everything and nothing and both sound as though they would be fine, kind of. “All we can do is, follow the world as it goes. All we can do is, figure it out as we go.”

This body of songs is, hopefully, a celebration of a relationship rekindled and revitalised. The voice and the music live in a happy and harmonius world, which makes the many lyrics depicting loss and what there once was all the more striking. The two have worked together, then stopped, but it is obvious that they left a lot on the table, and the reunion captures an awful lot of what was left dangling.

Beginners started up in Los Angeles’ Wiltern Theater, where Barbera and Ruth reunited to support their former Malbec drummer, Mark Pontius in Foster the People.

Let Go or Get Dragged offers perhaps the most specific references to what may have taken place in the fallow years. “My guilt, it weighs too much… Does she wonder where you are, when you are inside me.” Nice, but I am starting to feel a bit too closely involved in these love tristes.

The speed ratchets down for So Close I Almost Believed It, but it is still unmistakably the work of Beginners. “Shadows of the past life, cuts like a cold knife. Victims of love’s past.”
And there’s more: ““I never wanted to say… I won’t love you… don’t deserve to. In another lifetime, I would do what’s right. I would love you. Don’t deserve to.”

All this love, lost or revived, culminates in If It’s Not Enough. Barbera easily and pleasingly hits the high notes on this now familiar epistle to relationships endured or enduring.

“Honesty leads to trouble. Dim the lights, pull up the cover. I want to get lost in our skin, just how we used to. Breathe in, begin, falling apart.”

“Promise that it’ll all be fine.”

Yep, keep this up and it’s all going to be just hunky-dory.