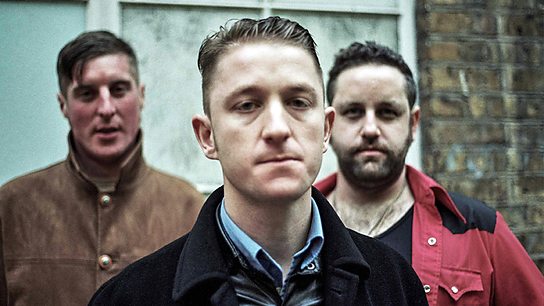 Fresh off the back of the release of their boisterous and enthralling debut album, Amphetamine Ballads, to say that Glasgow’s The Amazing Snakeheads’ gig at Broadcast was highly anticipated might just be the understatement of the year – at least in my case.

Judging by some of the recent press coverage, this is a band who have got people talking, not to mention extremely excited at the very prospect of witnessing them live.

And why? Devoid of pretentiousness, this is one Glasgow band with balls, authenticity and of course, a great set of tunes. Think the bastard offspring of Francis Begbie doing a mash up of blues, rockabilly, punk with Glaswegian accents.

Tonight the three-piece band core Dale Barclay (vocals), William Coombe (bass) and Jordon Hutchinson (drums) have a little help from their friends with Saxophonist Andrew Pattie and The Rosy Crucifixion’s Emily McLaren supporting them on stage. There’s even room for Barclay’s girlfriend Laura St Jude to get involved – on the song ‘Bullfighter’ her voice offers a brief feminine alternative to all the testosterone.

The cauldron of Broadcast is intense and the sweat is running down the crowds faces before a note comes. Barclay calmly appears onstage, looking as menacing as the sounds his band creates, and before anyone has a chance to stop clapping, the band begin with a stomping track which wasn’t deemed worthy to make the final album cut – the furious minute-and-a-bit ‘Testifying Time’ is the perfect intro to a show in which The Snakeheads will lay themselves bare. My personal album highlight ‘I’m a Vampire’ comes next, with Barclay screaming the best lyrics of the night and perhaps the most threatening show of affection ever recorded – “She’s more beautiful than any women A’v met/ And she fuckin’ knows it!”. You could stage an execution with the amount of energy going around.

We soon get the 100mph ‘Truth Serum’, reminiscent of the Pixies ‘Vamos’, which allows Barclay to give us another of his snarling screams, this time directed towards the drummer (“Jordi TELL THUM!”). Barclay has a scream, a howl, a cry of sheer unadulterated venom that evokes the very best who do it – I’ll leave it to you to make the comparisons.

The repetitive glory of ‘Here it comes again’ sends the crowd wild and at one point some folk spill onto the stage, prompting a swift direction to ‘calm down’ from Barclay’s mic. We obey.

The sinister yet seductive ‘Where is my knife’ is another album and show high point, a song which basically says don’t fuck with this band, as if we needed reminding. “Forget the rest now I’m your daddy” snarls Barclay at the obeying crowd, and for the duration of this gig it was indeed us, the crowd, who were the bastard offspring doing exactly what we were told.