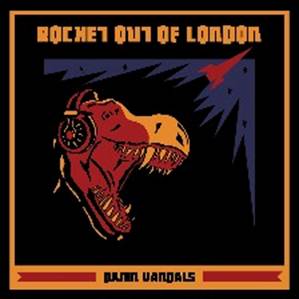 Damn Vandals – Rocket Out Of London

Highly rated London rockers Damn Vandals return with the follow up to their successful 2012 debut release Done For Desire. The sometimes difficult second album appears to have provided few problems though, and it sees a similar hard rock meets punk approach, with perhaps more of a stoner feel this time around. Rocket Out Of London’s ten tracks are again powerful slices of snarling attitude over a solid rock backdrop.

Damn Vandals’ musical approach is deceptively simple. Adam Kilmore Gardens on bass and drummer Chris Christiansen supply power aplenty while guitarist Frank Pick alternates seamlessly between massive grungy power chords and searing lead work. And Jack Kansas’ deep vocals rumble over the top, edgy and domineering with a brash defiance that thrills. At times he might tend towards shouting rather than singing, but it can suit the raw and highly charged lyrics of the more political songs.

Opening track and lead single Twist Up And Tangle gets the album off to a fast start with a burst of guitar before the vocals come in strongly. Number One Fan covers stalking in two electric minutes while the anthemic I Hate School and the fast paced Mad As Hell both fly along with real power and panache.

This Music Blows My Tiny Mind has more distortion than most and it creates an atmospheric backing complete with a thunderous bass line. And the closing title track is perhaps the perfect archetypical Damn Vandals song, with searing guitar and strong vocals working in harmony before the album’s big explosive finish.

This is a good album that once more displays the talents of a young band very well. It’s short and to the point at just 26 minutes in total; they are not ones for extended instrumentals it seems. Rather this is a band who know exactly what they want to say and get straight to the point. Rocket Out Of London will ensure that Damn Vandals remain on an upward path. Expect to see these guys on some big summer festival stages very soon.