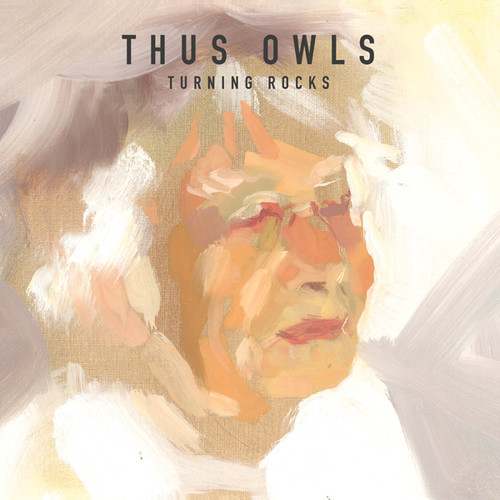 Turning Rocks is the fourth album from Thus Owls, a transatlantic Canadian/ Swedish band built around husband and wife duo Erika and Simon Angell. Their music is an experimental and at times psychedelic form of electro pop that combines widely varying rhythms with lush instrumentation and strong female vocals. The results are diverse and interesting, at times exciting and always emotionally rich.

Thus Owls’ new keyboard player Parker Shper provides much of the backing on this album, playing a wide range of modern and vintage instruments, and creating some very different effects that rise and fall throughout the ten tracks. At times it is difficult to work out exactly how many instruments are involved in some of the complex and layered sounds created, while at others a single synth picks out a delicate melody. Montreal drummer Stefan Schneider and Swedish bassist Martin Höper round out the band.

Opening track As Long As We Try A Little is the pick of the album. A slow piano backs the grief stricken voice of Erika Angell and gives it space to develop as the song grows. The superb emotional delivery tells of a singer who is living the song and not merely performing it. And the orchestral ending to the track, full of lovely guitar work, is superb too.

There are several other good tracks on the album. Ropes combines wailing vocals with guitar melodies and several synths to good effect, and its closing section builds to a fine crescendo. Smoke Like Birds opens delicately, the slow and lower pitched vocals quite lovely before the song builds. And the dark closing track Thief sees Angell joined by Taylor Kirk from Canadian folk band Timber Timbre, creating a male – female harmony that gives even more depth to a song that is positively creepy.

Turning Rocks is such a varied album that it is actually difficult to categorise. At times an indie pop edge dominates, yet for most of the album it is more experimental in its electronica. But the quality of Erika Angells’ voice holds it all together and the vocal range and emotional depth she shows are vast. It’s a good album, if one that definitely takes a few listens to get into, as there is so much going on. Thus Owls produce complex music – and it is well worth taking the time to explore it.