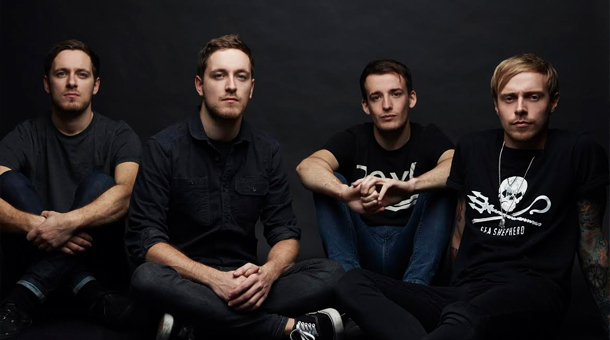 Brighton’s pioneering metallers Architects are currently doing a headline tour of Europe, following the release of their 5th full-length ‘Lost Forever//Lost Together’. Iqra Choudhry caught up with guitarist and co-lyricist Tom Searle to talk tour, tracks and taking the metalcore world by storm.

So, you guys have just started this tour, you’re three days in – how was the opening show in Manchester?

Tom: It was really good, yeah. It was the first time we’d sold out Academy 2 there, so that was really amazing, and it was a great atmosphere. We were nervous – there were a lot of songs we hadn’t played before and we hadn’t played a show for a few months, so we were terrified beforehand. We didn’t play to our best, I suppose – it was a little bit overwhelming, but the crowd was amazing.

Are you expecting anything in terms of people knowing the new stuff and singing along as you carry on with this tour?

Tom: We’ve had the album streaming for a little while now, just over a week. So, yeah, you think that maybe people might know bits, but we’ve been around for long enough to know that songs have to be around for a while for people to properly soak them in. To expect people to sing along to songs you’ve just released is ambitious – it does happen and it’s great when it has happened – sometimes when it doesn’t work out so well, you’re like ‘well, you know, it’s new’.

So are you planning another tour in the UK on this album cycle?

Tom: Well, we hope so – we obviously love touring here because the shows are great and it’s one of our best places to play in that respect. We wanna do more than we have been doing, but it’s difficult to find that balance. You don’t wanna play five tours, because people’ll be sick of it, but we will be doing another tour of this album, definitely.

You guys are going straight onto tour in the US with letlive. a week after this – are you looking forward to it? Is it different playing in the US, in terms of the crowd?

Tom: Yeah – we couldn’t sell out my bedroom in America. We’re basically a brand new band there, whereas here, we’re old dogs at doing this. So it is different, but I’m looking forward to it, we love the guys in letlive. and it’s not too long – the tickets seem to be selling okay, so hopefully people will come along and check out our new album.

Where would you like to tour – is there someplace you’ve not been yet and want to play?

Tom: Japan is always the one – we’ve toured places like India – we did a show there, and we’ve played in China, but Japan is pretty much the final frontier, really. We were meant to go once, but then the tsunami happened and so we couldn’t go.

I’ve got a few questions about the album – there’s a distinct change in the lyrical focus of the album. Daybreaker seems a lot more ‘openly political’ than this one.

Tom: Yeah, maybe – you’re probably right. I mean, the first track ‘Gravedigger’, kind of follows in that vein, but on the whole, we’re veering away from that. I didn’t want to do the same thing again. Daybreaker was the first album I wrote lyrics for, so I didn’t wanna follow the same pattern. I started writing, and thought that I was digging up the same clichés, and that I’d move on to something else, just to keep it fresh and not tread the same ground all over again.

Do you think the fact that you recorded it in more of an isolated atmosphere changed the way you approached it?

Tom: Well, what changed the way we approached it was the fact that we could record all night – there was no time we had to stop. Once the guys at the studio left, we could carry on and if we had some ideas pop into our heads, we could put them down. I think that influenced a few key bits on the album, especially with what Sam was doing. In terms of location, the studio was absolutely amazing and the guys that work there are brilliant, but it’s not fun staying on a lonely industrial estate for a month and we all sort of went a little bit crazy.

Tom: Very much so.

About ‘Red Supergiant’ – what made you choose that particular Carl Sagan quote?

Tom: Well, I’ve always liked it, I think it’s actually from one of the Zeitgeist movies. But yeah, we knew we wanted to put something there – we tried a few different things but we’re Carl Sagan fans, and it made sense, really.

I read your blog post after Broken Cross came out and it got some pretty heated debates going. I thought you got your point across very well; what was it that made you decide to respond in that way?

Tom: Because I felt like I was getting a hot sweat on listening to these people talking about it like that. They made it out like something stupid, as though we were just saying “Yeah, God sucks!” or whatever, and that was ridiculous. I felt like people had misread the song and that we were being misrepresented in terms of what we believe and want to put across. I felt like I had to do something, because it was making me feel uncomfortable having people say that we were saying “Oh, all religion’s bad”, because that wasn’t the point. We can all get on board with the fact that fundamentalism is a problem and that it destroys lives. So yeah, I felt like I had to set the record straight. But I completely understand how people could misinterpret the lyrics – they’re not exactly subtle.

Do you think the fact that you guys have songs that divide opinion so much is a good thing? They tend to spark that debate, get people thinking about it?

Tom: Yeah, well, it’s an extra element to our band, that maybe other bands don’t have and it’s not contrived. We’re not saying these things for shock value, and in all honesty, before ‘Broken Cross’ went out, it hadn’t crossed my mind that people would be upset by it. With ‘These Colours Don’t Run’, when we put that out, I thought ‘ someone’s gonna get mad about this.’ But I hadn’t thought about it with ‘Broken Cross’. It’s incidental, and I think that’s important. There’s a lot of bands out that might say things or have opinions that are more or less just for shock value and the controversy of saying whatever.

I didn’t actually find out about the work you guys were doing with Sea Shepherd until I was by their merch stand and talking to the lady at the stall. I think it’s a brilliant idea – what made you guys think to bring them on tour?

Tom: If we can tie the things we believe in and the organisation that we wanna support into our tour, then it’s a real bonus. I think we’d seen them on tour in Australia with Parkway Drive a few years ago. We all support it, but Sam is really passionate about it – it’s something he sorted out and arranged and its sort of unknown ground for us to take an organisation like Sea Shepherd out with us – if it helps them, that’s great. It’s the only grey area, really – if you’re a kid drinking cider waiting for a show, you probably wanna let loose and go nuts. It’s heavy stuff and that’s something to think about, but it can’t hurt to raise awareness and put their name out there.

What are you listening to at the moment?

Tom: We’re all listening to Sigur Ros. I’ve actually been listening to the new Issues album as well, which some people might be surprised by. The new Bombay Bicycle club album, I really like that as well.

Tom: I just said Issues’s album, didn’t I? (Laughs) No, I think it’s bad to have guilty pleasures. If you like it, who cares?

Any advice for bands starting out?

Tom: I would say – don’t try and be like any other band. I mean, we did try and do that, but the only reason we got any attention was because we were so bad at ripping off other bands that we didn’t sound like the bands that we were trying to rip off. But, on the whole, you see a lot of bands starting out and y’know, you watch them and see they wanna be like Bring Me The Horizon, and it’s like ‘well, we’ve already got that band’. You need to try something new and that’s easier said than done but you’ve got to try and do something true to yourself and not something someone’s already doing.

Architects are currently on tour with Stray From The Path, Northlane and Landscapes.