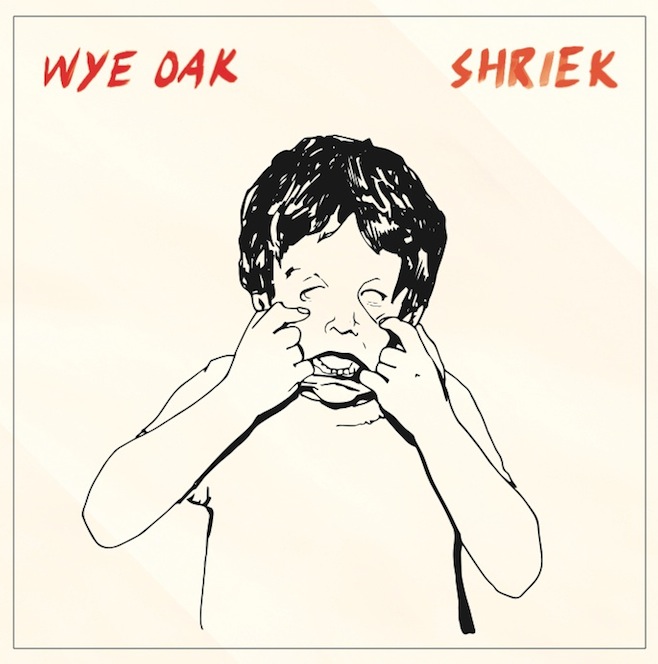 Making the safe assumption that Baltimore, Maryland’s Wye Oak were looking to create a dream sequence with their new album Shriek the end has been resolutely achieved. Swapping guitars for electronica has resulted in a stream of songs and consciousness that is at once joyful and a happy ode to the sleep experience.

Shriek, which was released on City Slang on April 28, opens and ends with the tantalising and revealing lyric in Before, “This morning, I woke up on the floor, thinking I have never dreamed before.” The “nagging thought that I have never lived” is a refreshing take on somnabulance, with vocalist Jenn Wasner wakened “with a grin”. She is accompanied by Andy Stack.

There have been various references to the vocal and musical style of Wye Oak’s new sound in reviews of this album, although there has so far been no mention of Annie Lennox, which is baffling. The music and even the tumbling mellifluence of the lyrics owe something at least to the Scottish chantreuse. Kate Bush comes to mind, and has been mentioned, and the lyrics portray deference to the newly-revived Wuthering Heightist, although not the style and musical accompaniment.

The album’s eponymous song, Shriek slips out under the cover of birdsong, as Wasner launches off with “In the city of the night, I was possessed”. A steady beat underpins lyrics that wend their way around cheery electronic sounds that quickly settle into the steady rhythm that runs throughout. There is nothing jarring here, with excellent production values that only occasionally leave the lyrics tricky to decipher, and that all helps to establish the pervading sense of dreaminess.

The sound is cleverly manipulated in The Tower, which incorporates a heavy firm beat reminiscent of the heavy tread of a giant. “The one who sings around the sun cannot be bothered with the dark. The reason exits with the light: the one, the sun, the night begins… The Tower of it all… it is the giant in the dream…”

Glory culminates in deliberately scratchy violin sounds that follow on from the jarring of a guitar being plucked. There is a loss somewhere in this song, revealed in “I see his eyes moving away from me. Oh no, is this another end to us…” The story wonders after ancestory as Wasner and her subject “share the cold”, before breaking into, “I watch the clock as it turns backwards; I see the water run uphill.” There is more in the story than I understand, but it is beautifully put, and that’s more than fine with me.

The dream sequence continues with Sick Talk and its staccato lyrics, which precedes School of Eyes and its offer of something very familiar from a long time ago. The tune and lyrical style is terribly reminiscent of a faster version of Donna Summer’s ‘State of independence’, although delivered over a shimmering musical backdrop and wrapped in deeper lines, such as “I see schools of eyes where there should be faces”. The music falls away, only for the electronics to break into something resembling an ultrasound examination.

A jollier vein is struck with Despicable Animal, but with the classic early beat layered over with mildly distorted vocals. Halfway through, a joyfulness erupts as Wasner asks her accomplice to “promise to dream deep. You are the one who makes me golden as I shudder in my sleep.” Paradise lives at racy tempo as the beat starts to gallop.

I Know The Law follows, although I couldn’t catch lyrics other than the disturbing, “A truth I cannot deliver…” and “In order to preserve this life, I have given my life…”
An abrupt end to the penultimate song segues into the Logic of Color, a full scale electronic affair that bounces around before settling into the steady, and now familiar beat. Buoyed by the possibility that “Everything you see is free…” and the pleasing “Give to me, and I’ll give back”, the core of this story is revealed: “The logic of colour is all the logic of my skin, and the colour of your eyes.” – I am baffled but I want to know more!

Shriek was a co-production between Wye Oak and Nicolas Vernhes of the Rare Book Room in Greenpoint, Brooklyn. Vernhes also engineered and mixed the album.