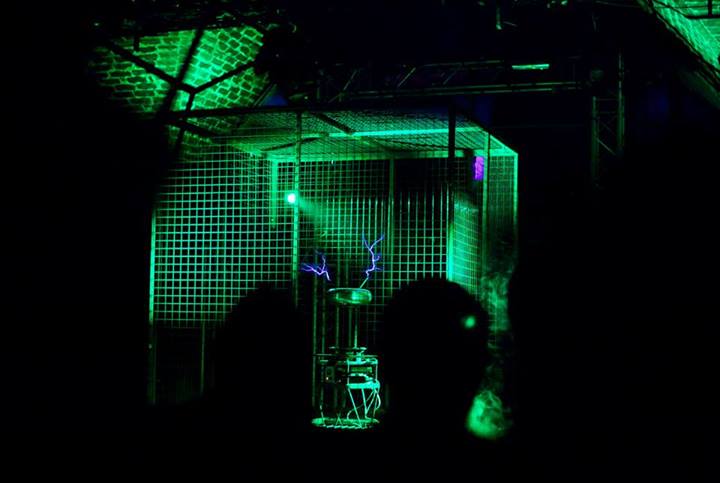 Dark Behaviour: 85a – The Arches, Glasgow

85a are a ridiculously talented arts collective who have been putting on some of the most exciting multidisciplinary work in the city for several years now. What’s perhaps not so well known, or best known to their friends, is that they also put on great parties. Who better then for The Arches to invite to send off their experimental theatre festival, Behaviour, with a bang?

As always with 85a’s events it’s difficult to tell where the stage ends and the world begins. As partygoers assemble outside The Arches, many of them having taken up the collective’s invite to wear a mask. Inside, many of 85a are even more spectacularly costumed, the giant octopus tentacle that’s running around on the loose being my favourite.

The evening is divided into three parts; first up are a variety of acts, including young performance artist Andrew Houston, casting visuals of singing figures onto his masked face to brilliantly creepy effect. Michele Hannah is another performance artist who uses music in unfamiliar ways. Cutting an elegantly androgynous figure, she slows down and deconstructs The Smiths ‘How Soon Is Now’ to icily hypnotic effect in ‘Sonne’.

The second part of the night sees bands take to the stage, but in the case of Mr Vast, that is something of an understatement. The artist formerly known as Wevie Stonder is a bit of a rave generation Viv Stanshall, coming on in a ridiculous bulbous costume and imploring the audience to let him crowd surf, but to be gentle with him bec ause he’s 40.. He’s earned so much good will by this point that we’re only too happy to oblige, before he returns to the stage and transforms himself into a stripy tower. As you do. “Grevious Bodily Charm”, as his album is entitled, Mr Vast has in spades.

One of the joys of the Dark Behaviour is the way that it explores the cavernous space of The Arches, done to maximum effect when another arch opens, and the crowd are admitted into the dark to…observe an audioreactive Tesla coil, reacting to some dirty beats.

In the adjacent Arch Planningtorock takes to the stage, and while I’m sympathetic to her, these deconstructions of gender and sexuality are maybe just a bit too…serious for this time of night. Still, the splayed beats and righteous anger of ‘Patriarchy Drop Dead’ are irresistible. Glasgow’s Golden Teacher finish the night in style, their Afrocentric electro proving as visually as it is musically intoxicating, and a fitting end to a truly carnivalesque evening.