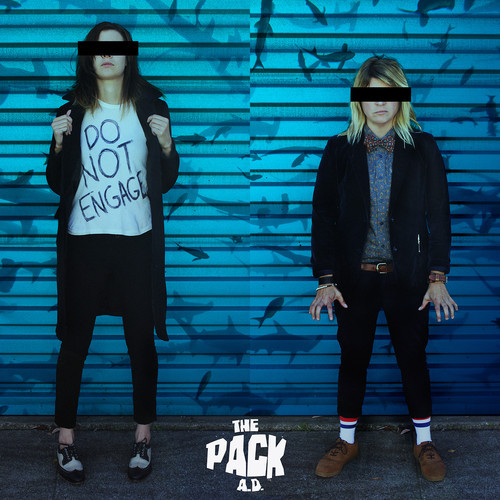 Do Not Engage was released on the other side of the pond earlier this year – and it achieved some very good reviews for the Canadian garage rock duo. Now UK fans well get the chance to hear some excellent, fast and fuzzy, powerful rock music thanks to Nettwerk. This is a band worth checking out if you have a liking for no nonsense, straightforward rock music that is built with real power.

The Pack AD are Becky Black on guitar and vocals and Maya Miller on drums. They hail from Vancouver and are known for incendiary live shows that are full of fire and fury, and are very loud. Their blues infused garage rock music is full of punk style anger and passion, but features some lovely melodies as well as massive distorted guitar riffs. Do Not Engage is the pair’s fifth album since coming together in 2006. Originally called The Pack, a clash of names with an American rap group led to the addition of A.D., which doesn’t mean anything at all according to previous interviews.

The opening five seconds of Airborne set the tone for this album perfectly. Miller’s drums are thunderous before Black’s big guitar riff and then passionate vocals are added. There’s a slightly spacey feel to the vocal, which sit just under the instruments. If there is a slight criticism of the production on the album it is that the vocals are not always as clear as they might be.

There are many good tracks amongst the eleven songs on the album. Big Shot is sneering and contemptuous, leaving the listener in no doubt that the subject is no star. Creepin’ Jenny has a more expansive feel, while the beautifully disturbing Stalking Is Normal thunders on. Animal brings a touch of blues to another massive track. Loser features perhaps the best vocal performance on the album, emotional and strained yet with a hint of the defiance that typifies this band’s approach.

But the best tracks are complete contrasts. Battering Ram is as subtle as its title suggests, a monstrous explosion of rock that charges forward before slowing nicely and then picking up speed once more. And the closing Needles shows a softer side, with Black’s comparatively delicate vocals backed by a slowly strummed guitar in a tender track that ends the album on a very different note to everything that has gone before.

For a two piece band there is a surprising variety in the music on Do Not Engage. Maya Miller mixes up the drum rhythms very nicely and has a good technique to go along with undoubted raw power. Becky Black uses her guitar as a weapon, cutting through the mix with power chords and incendiary riffs, while her vocals are at times spat out and at others more deliberate, but never losing their impact. The overall result is a very good album of exciting and high octane rock music.