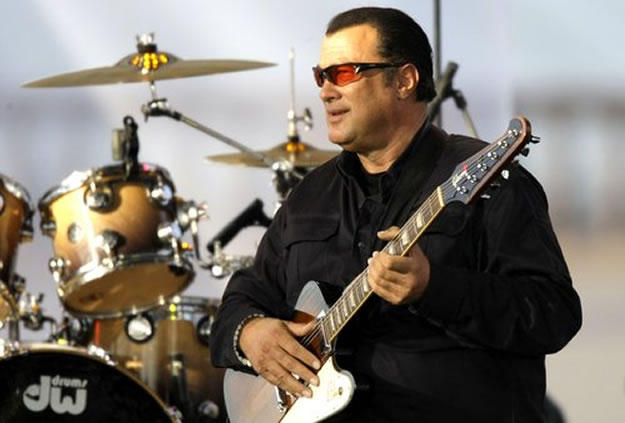 Not a lot of people know this, but martial artist and action film star Steven Seagal was the first Westerner to ever open an Aikido Dojo in Japan. Even fewer people will know that he’s also an accomplished blues musician and will be returning to the UK later this year for a headline tour with the Steven Seagal Blues Band.

When we were offered the opportunity to speak to Mr Seagal, our occasional guest columnist Ben Mills of UK punks The Smoking Hearts practically bit off our hand to speak to the man himself for us. After about 10 different phone numbers and back and forths with managers, secretaries, cleaners and a gardener, he finally got him on the phone to talk about his blues band’s upcoming tour; so without further ado, here’s what happened when Donny (skip to the end to find out why) met Steven…

Hello Steven, so good to speak to you especially after all the telephone tennis…

Ben, hello…I said to my wife give me the office phone number, I should of specified whose office. But I’m sorry – lets talk, how are you brother?

I’m good! Calling from Glasswerk Magazine in UK to talk about your upcoming tour and specifically the show at the O2 Academy in Liverpool…

Yes, I have a special affinity for Liverpool because we did 90 concerts on our last tour, which is a lot, and I can safely say that Liverpool was the best of the tour. They raised the roof. I’ve never played a place like that.

I have to agree, every time we play Liverpool it’s always a loud crowd, and friendly too. So your next tour is pretty extensive and you’re travelling pretty far. How do you stay sane?

It is, 25 – 30 shows with very few days off. I’m hoping to bring my wife, so that will help and the band and crew is like a family that we’ve built which helps a lot.

We’ve just toured Europe and without fail there have been ham and cheese sandwiches in every backstage room, do you get the same problem? Do you put anything bizarre or weird on the rider?

Haha, I wouldn’t be surprised if we got ham and cheese sandwiches, we always do, it must be a running thing with bands to get them in Europe. As for weird things on our rider, I don’t think we do but I might add something now…

So having toured a lot in the past, you must have some good tour stories? Care to share them?

Our stories are probably quite typical of touring musicians you know…

There are good times and difficult times, we always manage to get people jumping. And of course we get the weirdos too, it’s primarily normal but we do get our fair share of crazies.

So this new tour, do you have anything spectacular planned or is it going to be a very stripped down tour?

Well it’s a blues show, and we’re just starting rehearsals so I don’t know just yet but we’re going to try and do something different. I’m thinking it’s gonna be unusual, because we have some of the best players in the world in Blues, Country and I think it’s gonna have this mixture of blues and country that we call ‘Hill Country’ so it’s gonna be pretty unusual.

Are you going to be playing any new material, or just stuff off the last few albums?

There’s a bunch of new material, I think it’s really different this time around. It’s got this kind of crazy Southern, Rock, Country, Blues feel – it’s going to be really different.

As a movie star as well as a blues star, do you find fans of your movies have become fans of your music, or do you think the two are separate?

Now, I promised myself that I wouldn’t ask any questions about your film career or acting but when I told my friend I was interviewing you he begged me to ask this question…

He heard a rumour that when you’re filming a fight scene, you really slow down your movements so they can be seen on camera – is that true?

There is some truth in that, the camera doesn’t pick up super fast movements so when I’m doing fight scenes we do tend to slow it down enough for the camera to pick it up, so yeah that is true.

That’s awesome, sorry for that curve ball of a question but it’s very rare for my dickhead mates to get the opportunity to ask Steven Seagal a question. Whilst you’re over in Europe are there any places you’re keen to visit?

Well you know we’re going to visiting a lot of countries I’ve never been before so I want to see what all the countries have to offer and what the people of those countries want to show us.

Finally, is there anything else you wanna say or ask?

I think that’s it but if you’re any place where we’re playing I’d love for you to come say hi! Thanks for the call Donny…

So after all that he totally forgot my name and thought my name was Donny, but who cares – I spoke to Steven Seagal on the phone and he was a bloody nice bloke. Make sure you check his blues band on tour this June/July.