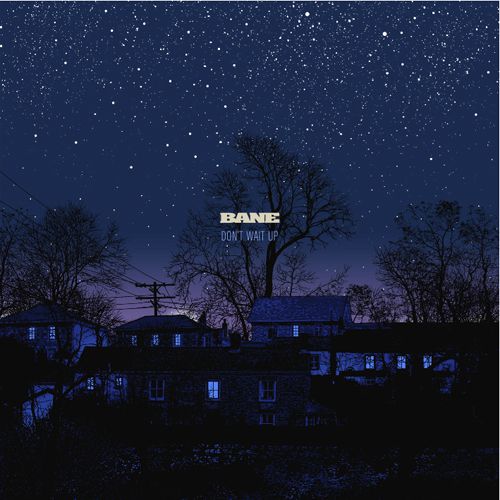 Not that there were ever any designated “rules” for hardcore-punk bands to follow, (nor should any ever really be imposed) but most people within the genre are aware of one of the most common-known “unwritten rules,” and that is the fact that it’s extremely rare for a hardcore-punk band to make it past the 2 year mark. If they do, it’s considered even rarer for them to record and release more than one LP.

It is immediately evident that Boston hardcore-punk band Bane, who’ve been a touring band since 1995, have never been ones for obeying any rules. Don’t Wait Up is the band’s fourth full length studio album, one year shy of a decade after their last effort, the legendary The Note. However, the thing that really stuck out as a bold move is that the band has declared this “their final record”. To close the door on something that has consumed every aspect of your life for almost half the length of it is a sombre task in itself, but to enter the studio to record an LP knowing that it would be your last piece of music together also must have been difficult for the band to do.

Nonetheless, Bane haven’t faltered one bit with Don’t Wait Up. In fact, it’s a perfect homage to the band’s career together; everything you’d want from a classic Bane record and more.

Opener “Non-Negotiable” seems to burst into life almost instantly, fast paced drums and snarling guitars set the tone for what seems to be a classic old school hardcore song, right before being brought down to a calm end, with vocalist Aaron Bedard repeating the phrase “I’ve never known a bliss like this.”

“All The Way Through” stabs the record back into action, chugging guitars lead into a fast paced number about the innocence and naivety of youth and how it is precious to have, as if ageing spoils the dreams of the young. Elsewhere “Calling hours” is a stern reminder of how Bane have managed to remain such an iconic hardcore-punk band for as long as they have done, bending all the boundaries of the genre with the help of friends from bands such as Down To Nothing, Terror, Rotting Out, CodeOrangeKids and Have Heart.

“Park St.” is probably one of the heavier songs on the record, ending with a breakdown that would please any pit-hungry hardcore kid, whilst “What Awaits Us Now” lulls you into a false sense of security that the song may be more on the calm side of things, right before blasting into 74 seconds of pure rage. In “Hard To Find” Bedard touches on the subject of fair-weather friends with lyrics such as “when we were so in love with pretty words like loyalty, and unity, this is your legacy, where will you be?” whereas following track “Lost At Sea” focuses on his own anxiety issues with the thought of his band finally laying to rest: “I look at me and I can’t see me, without this.” and “Post HOC” is a contender for a hardcore anthem in its own right, showing a darker side to Bane’s music right before a massive climax combining gang chants and stomping rhythm.

One of Bane’s best traits is Bedard’s ability to say it how it is. He goes beyond boldness with “Wrong Planet,” a song with a subject matter that could crumble mountains – his and his family’s sexual abuse at the hands of his Grandather. This is undoubtedly one of the boldest songs ever penned within the hardcore scene, with lyrics like “Trust, became a diamond to me, beautiful, forever out of reach” explaining the hardship Bedard has endured trusting anyone ever since his youth. As the song progresses with a confessional of how hardcore has helped him come to terms with things, poignant lyrics pour out as he reveals “at last a place where i could breathe” and “I failed to protect my only brother, when he needed me the most. So I’ve tried to stand by those who I could and we were screaming all as one.”

The records finale, and possibly one of the standout tracks is “Final Backward Glance” – almost a farewell letter to the band itself, words such as “I won’t carry you in my heart, you are my heart” and “you made me feel just like a hammer, in a world lined with nails” performed as if they were being spoken to a friend at a funeral. Much like the first track, the song is then taken to a different place completely; with one guitar playing a progression of sombre chords we hear Aarans last few words of absolute wisdom right before the track builds into a glorious climatic end with “This is my final backward glance” being chanted again and again.

This record undeniably shows why Bane are one of the most important and iconic bands in hardcore punk ever. The lyrical content is bold, daring, simple and honest but still extremely intelligent and relevant, whilst the music (although retaining its classic “Bane sound”) still pushes all the boundaries most hardcore bands wouldn’t dare to toy with. Although it’s a musical “goodbye note” from the band, this album proves that Bane will be remembered as legends amongst the hardcore punk scene forever.