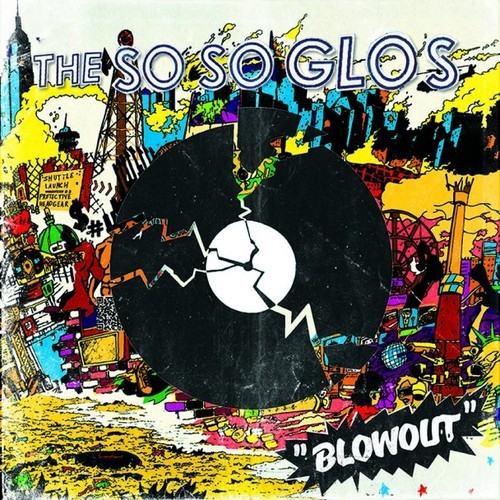 The So So Glos – Blowout

Brooklyn punks The So So Glos have a satisfyingly mature approach to their genre – if intellipunk was a thing, these guys would have been the frontrunners. Blowout is crammed full of massive pop-edged, mathy punk hits that borrow as much from UK post-punk and new wave bands as they do from their US punk rock forebears.

Variously evoking The Clash, The Cure, Dead Kennedy’s, Katrina & The Waves and The Cars all run through with a dose of the current wave of New York punk that includes METZ, Big Ups and Trash Talk, this album is a treat from start to finish. There’s more than a doff of the cap to the founding fathers of rebellion and riot built into their staccato surf-tinged chops of title track ‘Blowout’ that comes complete with a Long Beach ska influenced skank-along more typical of Californian punk, not to mention the fingertapped guitar solo. Colour us impressed.

Blowout carries all the hallmarks of a band who’ve been playing and writing for years and aren’t about to change what they’re doing any time soon, but their particular brand of old school pop chorus-writing has reached full maturity on this album – it’s a joyous listen that will, criminally, probably never reach the giddy buzz-heights of the aforementioned METZ and gang. Some people would think that was a bad thing, but for those of us who’ve found this hidden gem and slowly wiped the mucky Brookyln venue sludge from it’s gleaming exterior, it’s a chance to hang onto one of those bands that nobody else seems to have heard of and give you that feeling in the pit of your stomach.

This album is so effortlessly cool, so expertly crafted, so packed full of spirit and good-will and so likely to be overlooked by the mainstream media that it sort of restores your faith in finding genuinely wonderful music.