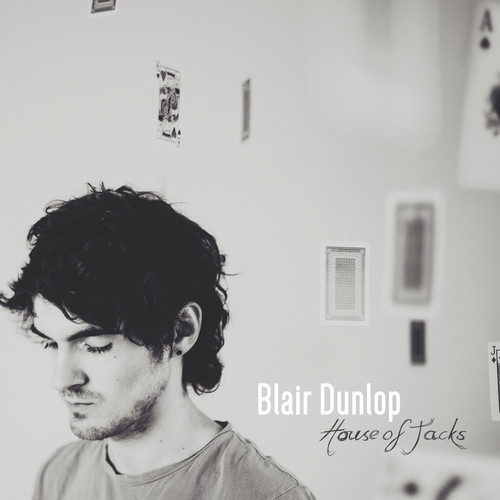 Blair Dunlop is the son of folk musician and Fairport Convention founder Ashley Hutchings and took over as lead singer of long running English folk group The Albion Band from his father. So listeners might be forgiven for expecting Dunlop’s second solo release to be a fairly traditional folk album. But it comes much closer to rock territory, mostly uptempo and optimistic, albeit with a folky feel in places.

House Of Jacks shows Blair Dunlop to be a mature songwriter, with lyrics here that display a wisdom, and at times a world weariness, far beyond that you might anticipate from a 22 year old. He also shows some very good guitar skills and has a smooth voice, displaying the ability to deliver his lyrics with deep emotion. In short, this is a well rounded, well produced album of very good songs.

Opening track and lead single Something’s Gonna Give Way is a lovely folk rock track, guitar based and with a fast pace. A fiddle gives it an Americana feel, contrasting with the solid drum beat. The album’s title track is a gentle and philosophical tale of self-reflection, a big organ sound backing the vocals, and Fifty Shades Of Blue is similarly deep and analytic, a song of heartbreak that has a mature feel. Softer vocals are used on The Station, which is gentle and tender with a delicate female harmony and probably comes as near to a folk track as there is on the album.

Sitting at the centre of House Of Cards is an excellent pair of linked songs, 45s (C ’69) and 45s (C ’14), that tell the story of a Soho club. The first is a tribute to the innocent times of the 1960s, when “prince and pauper co-exist like rock’n’roll and folk”, referencing The Kinks and Dylan, and the second describes the club in more modern times, a bleak picture of a sleazy venue where “it’s easy to find a girl”.

The Ballad of Enzo Laviano has an epic bluesy feel while Different Schools is close to mainstream rock with shimmering guitar, a lovely melody and a solid vocal performance from Dunlop that shows he has some power at his disposal. Instrumental track Violas Reverie is bold and allows his guitar skills to shine. The one cover version here is the slower Song Of Two Bridges which closes the album. Written by Hutchings and his former Albion Band colleague Ken Nicol, it also has an Italian theme and ends things on a gentle acoustic note.

House Of Jacks is far more than a folk album. Blair Dunlop has a lovely songwriting style with plenty of imagery and poignancy on display. There is depth to his writing as well as flair. He displays a solid vocal style and there is some lively guitar work on show too. This is a very good album and marks Dunlop as a young songwriter with a big future.