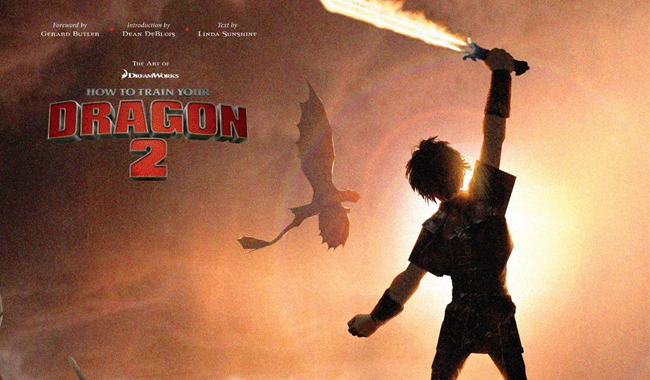 The Art Of How To Train A Dragon 2 Review

We’ve talked a lot about how ‘art of’ books fall slightly short of expectation every time – but this one finally nails it. It is gloriously jam-packed with every inch of space covered in something interesting.

The introduction includes a double page spread of the animation teams trip to Svalbard. You know if they’re gong to include something like that, the rest of the book is going to have the same level of detail. The Svalbard spread details why they want and what they got out of the trip – a good reminder for all budding artists that research is essential.

Every page that follows contains images from a whole aray of mediums, from pencil sketches, monochrome prints, colour matte paintings and still of 3D objects from the film. They’ve included lots of images and text on this lovely aged scroll-like paper which gives the book it’s own identity, it’s not just a load of images stuck into a book.

I found myself reading a lot pf the text, which isn’t something you’re always drawn to with so many lovely visuals, but this book is just really interesting. The text gives you a real idea of what the thought process was at every stage of the film.

They have also really limited the amount of final stills from the film, which is ideal – you get that from the film anyway. There are a lot of cool sketches of weapons and the mechanics of how they worked. the character design spreads have a host of sketches, turnouarounds and expressions – there’s a particularly good sketch from Nico Marlet of Stoik and Skullcrusher to look out for. Further on in the book there are some terrifying images of Drago including war paint designs and pose sketches from Tony Siruno. In fact the character design detail in the book far surpasses any other art of book that’s passed through Filmwerk’s hands.

And then you get to the pages of dragons. Anyone who spent an inordinate amount of time as a child drawing dragons is going to love this section. Crammed with sketches, some looking as if they’ve been done in biro. The environment stuff is so so, but after all that glorious dragon stuff I hardly noticed – that’s what we’ve all bought the book for anyway. This book has set a new high standard for Art of books and I’m now really looking forward to seeing all these ideas come to life in the film.