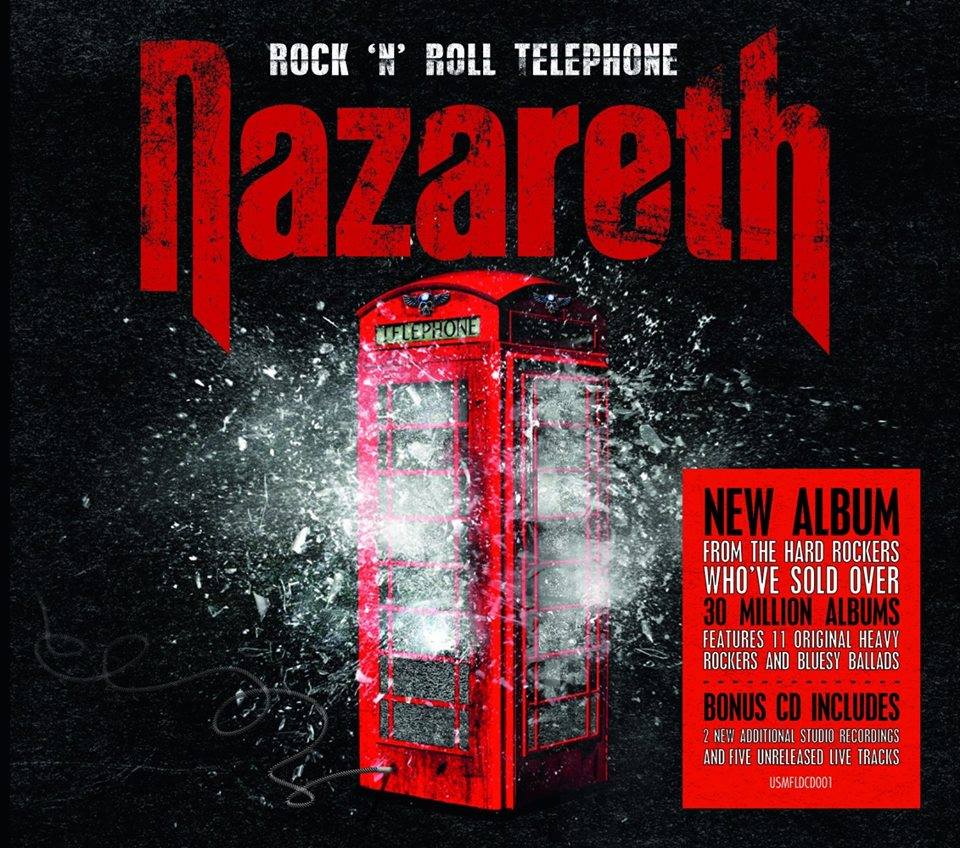 Scots hard rockers Nazareth first got together in Dunfermline way back in 1968. Now some 45 years and 22 studio albums later the band releases a typically bluesy and hard hitting collection that marks what is probably vocalist Dan McCafferty’s final recording session. This leaves bassist Pete Agnew as the only remaining original member of the legendary Naz, who have sold over 30 million records and blazed a trail for many rock bands who came after them.

Nazareth, named for the town in Pennsylvania mentioned in the opening line of The Band’s classic song The Weight, have basically seen and done it all. Albums, tours and hit singles in many different countries. Brilliant original songs. Great covers of classics such as Love Hurts and This Flight Tonight, a track that its writer Joni Mitchell later described as having become a Nazareth song, so taken was she by their very different interpretation.

Rock N Roll Telephone is a return to the old school for Nazareth. The title track has a blistering guitar intro from Jummy Murrison and a solid groove is set by the rhythm section of Pete Agnew on bass and Lee Agnew (Pete’s son) behind the drum kit before Dan McCafferty comes in, his voice as gravelly and whisky soaked as ever. One Set Of Bones also mixes typical McCafferty vocals with more great guitar work from Murrison. The harder Punch A Hole In The Sky would fit nicely on any number of classic albums from the back catalogue with its big riffs and fast drumming.

The band’s more reflective side is on show here too, with the atmospheric Winter Sunlight and the slow blues of The Right Time both working well. Long Long Time opens with some strange electronic effects and is very different from the rest of the album. Slow paced and featuring a synth beat, it is the one track that doesn’t really work. But the laid back Back 2B4 pretty much sums up the mood of the album. It’s not just about looking back, more about celebrating the past while also looking to the future.

The album proper ends in real style. One of its best tracks, Speakeasy is fast paced and relaxed while God Of The Mountain is an old style, hard rock epic that simply has to be played loud. There are various versions of the album that also include bonus studio and live tracks too.

If this is indeed to be Dan McCafferty’s swansong it is no surprise to find that he is ending as strongly as ever. One of the most distinctive voices in hard rock is used to good effect throughout, making this another fine album to add to a stellar collection. McCafferty has definitely retired from touring, and it will seem very odd to hear tracks from this album sung live by the band’s new vocalist Linton Osborne. Now there is a man with very big shoes indeed to try to fill.