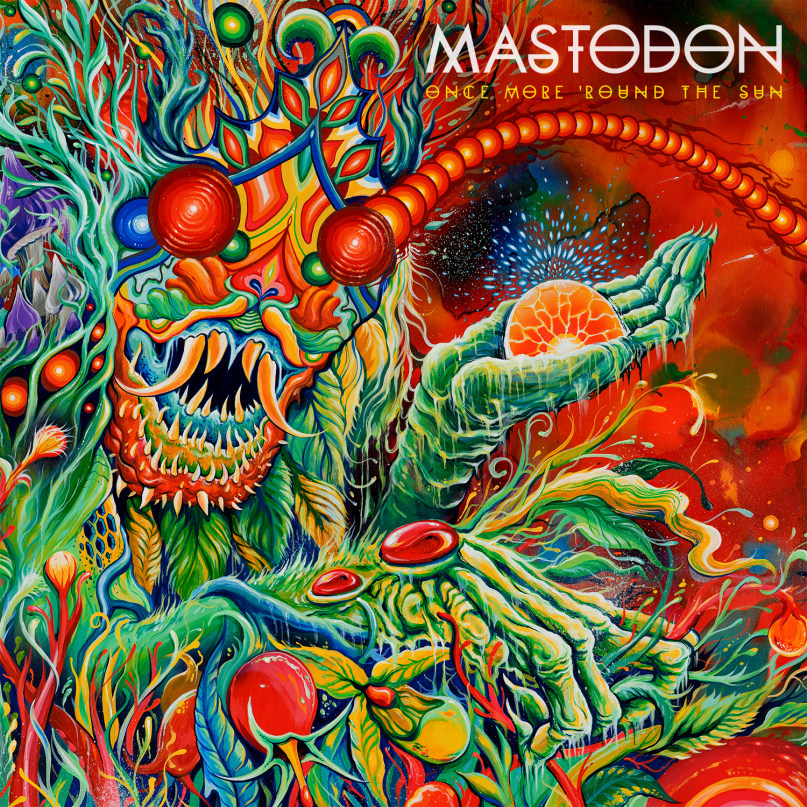 Mastodon – Once More Around The Sun

Mastodon have always been the thinking man’s metal band – dark enough for the more gothic end of the spectrum but with an accessible edge, their tsunami of riffs ploughing a furrow in the metal scene that collects stragglers from all corners and unites them under a rapturous banner of headbanging and noodly guitar-work.

On their sixth full-length album, Once More ‘Round the Sun, the band address themes of loss and rebirth, exploring 365 days in the life of their career. The cyclical theme of the lyrics and narratives tie in well with their particular brand of spiraling metal that’s consistently shone brighter throughout their career. With the talents of super producer Nick Raskulinecz (Foo Fighters, Rush, Alice In Chains, Deftones, etc.) at the helm there’s a decidedly chunky feel to the riffier sections and, no doubt thanks to that Rush influence, the trippy instrumentals get weirder and spacier, as evidenced on the supernatural freakout of ‘The Motherload’.

Brent Hinds lets out an unholy psychedelic slide guitar solo during the title track that melts its way into the otherwordly sway of ‘Chimes At Midnight’ – quickly rudely interrupted by a pulsating b-movie riff that opens up into a brutal stomper. ‘High Road’ harks back to the early days with a churning, doomy guitar storm that marches ominously over relentless waves of stiff drumming, with the biggest surprise coming from ‘Aunt Lisa’, an anthemic send-off to drummer Brann’s late aunt featuring Atlanta femme punks The Coathangers on a rousing gang vocal.

Once More ‘Round The Sun is another resounding success for a band surely on their way to the Heavy Metal Hall of Fame before long, serving as a rallying cry for heavy music fans from all corners – it’s intellectual, emotional, explosive – a prime example of elevating heavy music to its highest level. The Leviathan rides again.

Venue: Once More Around The Sun
Support Band: Warner Brothers