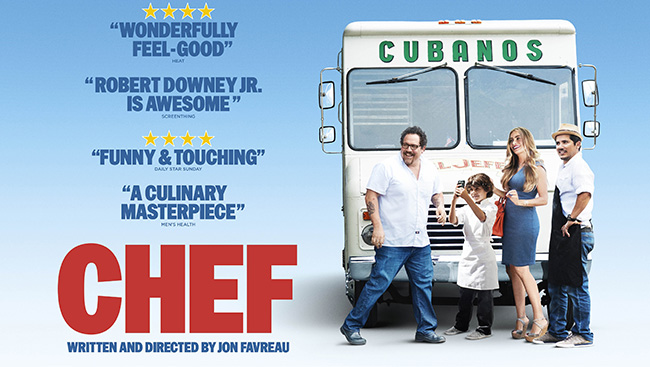 Jon Faverau plays Carl Casper a fine dining chef who is walking the line between former protégé art genius and sell out set-menu maker. In a swift turn of events it becomes clear that the choices he thought he had as a head chef were even more limited than first implied to him. Added to this is his continual dismissal of his son who he spends time with but rarely in the moment with.

After an altercation online (thank you twitter!) with a well respected film critic, Chef finds himself starting over, and with the aid of his family and a few friends decides to get his career rebooted with a food van.

This is much more a personal journey for Faverau about a man seeking his passions in life and repairing the connection with his family at the same time.

True it seems he has nothing short of the best friends, an overly accommodating and understanding ex-wife to help him along the way. This is a film with a few contrivances, but when you are having this much fun it isn’t likely to matter. This is a story about the journey – which eventually does turn into a road trip as well. It’s filled with character moments, humour (and adult humour with plenty of F-Bombs which if they had wanted to, could have clipped for a different certificate – but glad they didn’t), and plenty of delicious looking food being handled, chopped, diced, fried, simmered and served.  There are not many people on the planet that are not a fan of food, but even this will leave them with a watered mouth.

Faverau calls in a few old friends from his directorial past to pop in for company – and thankfully these parts are greeted with energy and zest – so don’t feel so much like a mate doing a director a favour.

Robert Downey Jr., naturally does his best to steal the screen in his cameo appearance. Scarlet Johansen dresses down as the female colleague who helps send Chef on his journey. But it is the guys who join him on the way right to the end that make the film so enjoyable. Carl’s son impresses without ever being an annoying kid stereotype. You get to watch the two bond over the father’s profession. John Leguizamo as his Sous-chef is, as ever, an absolute delight to watch on screen working his charisma, zingers and general good will towards what his character believes in in life.

Chef is a feel good wonder that may be slightly removed from reality – but is sure to delight anyone that dares to hit the road with it.