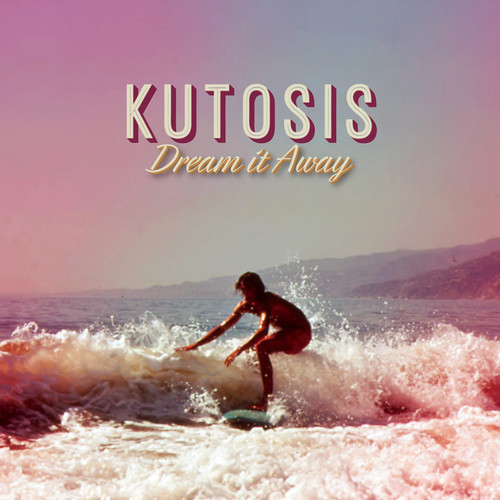 Kutosis – Dream It Away

Cardiff trio Kutosis return with their second album, three years on from the very successful Fanatical Love. Dream It Away was produced by Rory Atwell (Veronica Falls, Yuck, Palma Violets) and has a much cleaner sound than the fuzzy shoegaze of their debut. The guitar sound is mainly trebley rather than distorted, and there is much more melody here, with some big anthemic choruses on display too.

Opening track This Avalanche Is builds a massive atmospheric swell of sound that sets out a statement. This is going to be a big album. But the single Crystal Beach immediately takes things in a more poppy direction, shimmering and melodic with a summertime feel. The powerful and bass heavy Old Judas is slower but passionate as deep vocals in the verses contrasts with a higher chorus and a guitar melody flits in and out.

Feel Love is a bit different, acting as something of a break from the big sounds, a slower and decidedly fuzzy love song that is straight from shoegaze country. There are a couple of odd tracks on the album too. French Canadian Girls is very repetitive, with most of the lyric comprising of the title repeated over and over and the vocals strangely distorted. Short Stories is lo fi with a curious stop-start guitar sound and shouted vocals, although the bass line is strong.

But the finish is strong. Fear of Flying is another atmospheric monster, the bass and guitar working well together as they vocals float over the mix. The occasional drum fills add much to a track that becomes frenzied and powerful. Volcano ends the album in real style, starting slowly with a restrained beat backing strained vocals. The expected explosion comes in the form of a burst of guitar that takes things to a new level before things subside into a gentler conclusion.

Kutosis have been gigging hard over the last couple of years and building quite a reputation as a live act. The release of Dream It Away shows that they have some good new material and the ability to adapt their studio sound. There are some good bands coming out of Wales these days. Kutosis show with this album that they deserve a place on that list.