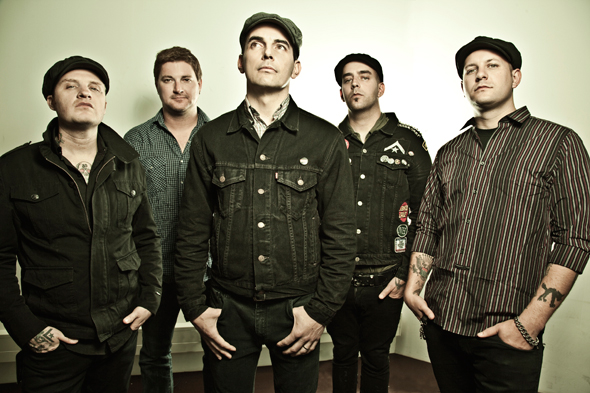 A Quick Chat With Street Dogs

We caught up with Mike McColgan, singer from US punks Street Dogs, ahead of their August headline tour in Europe and appearance at legendary Rebellion punk festival in Blackpool to find out more about what goes into making their scrappy, anarchic brand of Bostonian punk so irresistible.

When we first started playing music…
When Street Dogs first started playing music our goals were modest. We wanted to record songs and just play locally in Boston. I guess fate,life and the universal forces from beyond may have had different plans for us as we are now five albums deep with multiple new 7’s . Chapter 11 status, divorce, bust ups and overindulgence with regards to spirits haven’t even been able to sink us. We’re still here and I believe we are better than ever. If we had to choose a new name for the band it would be The Good Fight because Street Dogs although somewhat catchy doesn’t really sum up what we are about. I really feel like a name like the Good Fight would have quickly explained what we are about.

We knew we were onto something when…
I really feel we knew we had something special when songs like Savin Hill, Fighter and Declaration started to come to fruition. There was a feeling in the rehearsal room of electricity and excitement. You cannot adequately describe what that means with words. You have to experience it to know.

We’re most proud of…
I would venture to say we all are most proud of the self titled album. In our estimation and with many fans as well it is our best record. It is the best representation of our band and what we do.

Our favourite place to hang out is…
Berlin Germany, Stockholm Sweden, Prague Czech Republic and of course London England

We can’t stop listening to…
Bob Dylan, Against Me, Gaslight Anthem, Ryan Adams, Uncle Tupelo, Interpol,Blood For Blood, Sick Of It All, Madball, Agnostic Front, Jenny Woo, The Bouncing Souls

Catch us next…
Catch us this August at Blackpool Rebellion festival, at The Underworld in London and in Winchester at The Boomtown festival.