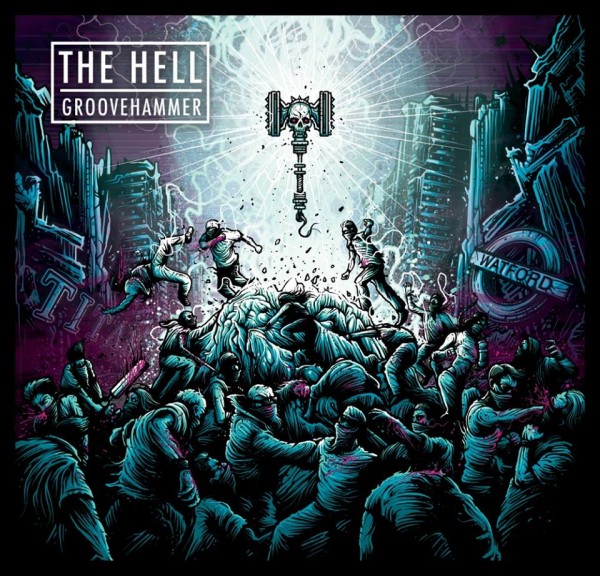 The Hell are a band that are all about the music. Their masked faces make for a lack of identity, but does instantly catch peoples interest. In a similar vein to early Slipknot, the faceless band must have all their prowess in their product, and with their new record Groovehammer they prove once more that they are one of the most exciting hardcore bands in the UK today.

Previously released singles ‘Everybody Dies’ and ‘Bangers and Mosh’ give an idea of what to expect from The Hell’s latest offering. Muscular riffs and scorned, hateful lyrics are the belly of this record, and it’s done to precision.

Opener ‘Take Me Out’ pings along and sets up the atmosphere for the next 12 tracks. The title track is filthy, as one of the many vocalists (the band has about 30 members, according to their Facebook page, and as all are given nicknames, it’s a bit tough to single one out) roars “You got hit by a groovehammer… / straight to the nuts”. With lyrics like this you can see where this record is going, or at least you think so. Groovehammer, as a product, holds many surprises, and it’s because of this that it’s a delight to listen to.

well, as much a delight as it can be, with songs like ‘We Handle Shit’ and ‘We Love Dicks’ in the tracklisting. The latter of these is begging to be heard live, and will see any space turn into a riot. Such nasty riffs need to be out in the open and get some air, while there are definite call-and-response moments as the band roar out the song’s title over and over.

‘Speed Shit Up 2’ is 40 seconds of high octane noise, while ‘Battleship’ follows with all of the throaty roars, and enough riffs and hooks to fill an album’s worth of material.

Album closer, the poetically titled ‘I’ll Snap Your Fucking Head Clean Off’, is a 5 minute long furore into hardcore, where The Hell throw everything to the fray that we’ve seen for the past 30 minutes or so, bringing Groovehammer to it’s climatic close with an ending you couldn’t anticipate, much like the whole of this album.

The one thing to remember with The Hell is that they’re here for nothing more than the music. Anonymity is key to their cause, and the proof is in the pudding. One of the loudest records you will hear this year, Groovehammer is also one of the best you will hear. As far as hardcore can go, these guys bring it that bit further. This is The Hell. You Dick.