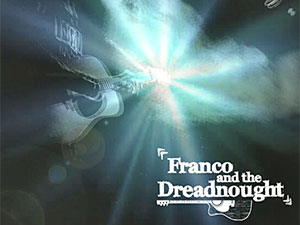 John Blaylock is lead singer of Manchester band International One. His alter ego is Franco and along with the Dreadnought (his DXME Martin acoustic guitar) he had produced this debut solo album of acoustic folk rock tracks. On the verge of a move to LA later this year to grow his solo career, the Mancunian singer will soon be embarking on one last UK tour to showcase his new songs.

Franco has a strong voice and a nice line in guitar work. His lyrics are heartfelt and emotional, the generally mellow sound reflecting a confident performer. The pace is mainly slow, at times almost spoken rather than sung, and there is a Jake Bugg like quality to the vocals in places. His Manchester accent is strong, and that can be either authentic or annoying depending on your viewpoint. It does take a little getting used to – but it is worth the effort.

The single Last Man Standing is excellent, a defiant song of overcoming adversity to triumph in the end. It starts slowly but grows into a real indie anthem that will have fists pumping when played live. Another very good track Platt Fields (named for a park in South Manchester) has a bigger sound with expansive harmonies and the vocal power comes through strongly.

There are a few different sounds on the album too. Moonshine & Roses comes closer to a folk feel with its slow pace and finger picking guitar. American Dream shows the more rocking side of Franco very well, while Monsters & Ghosts with its deeper vocal delivery has a touch of danger to it. Where Did All My Friends Go has a spoken word intro and the musings on losing touch with friends is very lad-rock. The guitar solo is good though.

This is a decent debut album from Franco and the Dreadnought. Passionate songs sung with depth and style allied to good instrumental work give a melodic and tuneful sound. Twelve good songs add up to forty minutes of entertaining acoustic music.