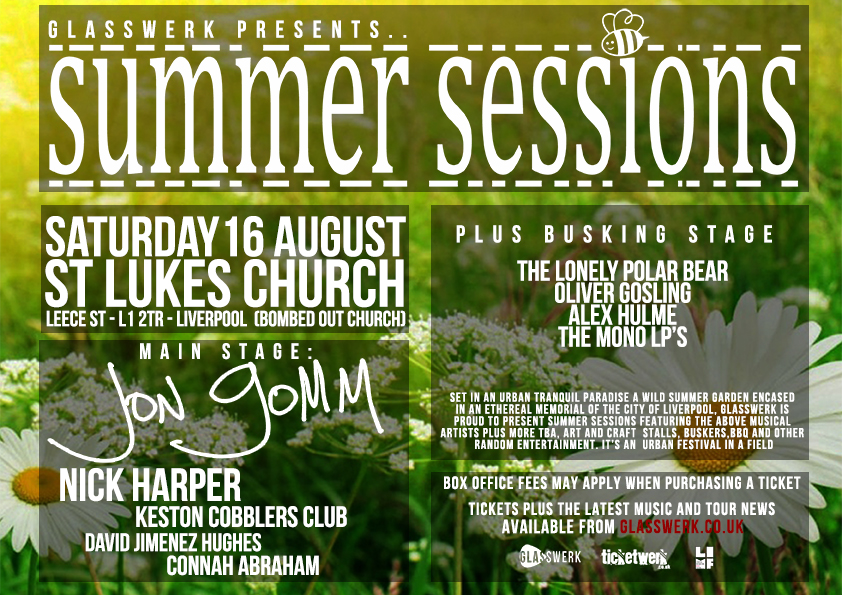 We have 2 pairs of tickets to give away for the inaugural Summer Sessions at St Lukes Church in Liverpool. Read below for more details.

Just days away and we are delighted to confirm the final opening acts on the main stage for the event, and the line-up for the busking stage, which completes the musical programme for the inaugural Glasswerk presents – Summer Sessions.

There will also be a Bratwurst BBQ, fully stocked bar and a village of craft and vintage stalls to fully re-create the country field festival vibe – just in a church with no roof in the middle of Liverpool city centre. Brilliant!

Now added to the main stage are musical genius in the making David Jimenez-Hughes and local youngster Connah Abraham. Delighting the crowd inbetween sets on the un-plugged busking stage will be The Lonely Polar Bear, Oliver Gosling, Alex Hulme and The Mono LP’s.

Set in an urban tranquil paradise, an urban wild summer garden enclosed in an ethereal memorial of the city of Liverpool – The Bombed Out Church – Glasswerk is proud to present Summer Sessions featuring live music, art and craft stalls, buskers, BBQ and other random entertainment. It’s an urban festival in a field.

Featuring acts Jon Gomm, Nick Harper and Keston Cobbers Club, Summer Sessions is a chance to relax and enjoy a field festival vibe, with the city just outside the walls.

Ticket prices for the festival:

Headliner – Jon Gomm – www.jongomm.com
A folk affair of international renown with one of the world’s greatest guitarists, Jon Gomm, headlining this special event.

“Hands down the most amazing guitarist I have ever seen”–Tommy Lee (Motley Crue)
“One of the world’s most successful, gifted and inspirational guitar players” – Acoustic Magazine

Nick Harper – www.harperspace.com
6 studio albums and Nick Harper is still enthralling audiences with his introspective, often political and caustic wit from stages near you –
“Dylan for the iPod generation, Betjemen with a guitar” – Guitarist (UK)
“His soaring vocal range and propensity for epic song place him somewhere between Rufus Wainright and Jeff Buckley” – Mojo

David Jimenez Hughes www.facebook.com/DavidJHmusic
A fusion on Flamenco, Folk, Acoustic, Funk and Trance – all powered by an acoustic guitar –
“’A Point In Time’ is a great treat of instrumental brilliance.” – Liverpool Sound And Vision