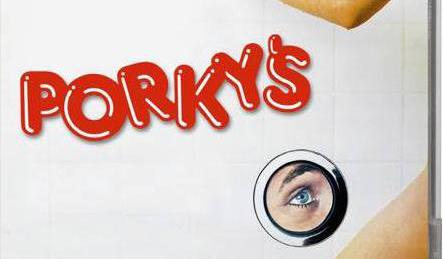 It never ceases to amaze me how out of touch major Hollywood studios appear to be when considering green lighting a script. Sure, there are always surprise hits either critically or at the box office, but after the financial successes of movies like Airplane (1980) and National Lampoon’s Animal House (1978) it would have seemed obvious to me that a crude comedy about a group of high school boys and their never ending quest for steamy (awkward), adolescent sex would be a runaway hit. The big wigs at 20th Century Fox didn’t see it that way however leaving writer/director Bob Clark fighting tooth and nail to get Porky’s made with a measly four million dollar budget and the constant threat of cancellation. Despite all this it would go on to become the 5th highest grossing film of 1982 placing it above Star Trek II: The Wrath of Khan, Poltergeist and Gandhi in a year that saw the release of crackers such as E.T., Rocky 3, Tron, The Dark Crystal and Blade Runner! Whilst at the time pummeled by critics yet adored by audiences, Porky’s may have some unique charm that some people just don’t ‘get’ or perhaps there is some kind of polarizing effect from the performances of the cast.

For me, Porky’s is the original and best teen comedy that provided the template for inferior ‘kind-a-likes’ such as American Pie (1999) and The 40 Year Old Virgin (2005). The story follows a group of wonderfully stereotypical teenagers in a 1954 school and their hormone-fuelled escapades. There’s the two liberal ‘thinkers’, the jock; affectionately named ‘Meat’ due to the supposed size of his manhood, the rich kid, the ‘bad boy’ – complete with white trash father, and the unforgettable Pee Wee (Dan Monahan) – the classic ‘virgin nerd’ and brunt of many-a-joke. Names aren’t important though, all that matters is the role that each character plays in the endless torrent of increasingly ludicrous laugh-a-minute situations that the boys find themselves in. Pretty much the entire first half of the movie is a sequence of gags that ease us in to its delightfully infantile tone and it’s here where some of my personal top moments in movie comedy happen; including the ‘Mike Hunt’ phone call gag – if you need any more explanation than that you clearly haven’t seen ‘The Simpsons’ which repeatedly recycles this joke, The ‘husband’ chainsaw maniac, Kim Cattrall howling like a wolf and the infamous voyeuristic shower room scene. That Particular moment leads to a side splitting display in which an outraged Coach Ballbriker (Nancy Parsons) attempts to apprehend one of the boys by holding on to ‘him’ from the other side of a wall via a convenient penis sized hole. Eventually, after finding themselves humiliated at the hands of a sleazy strip club owner named Porky (Chuck Mitchell) the boys plan an elaborate scheme of revenge.    Whilst a vulgar and juvenile comedy such as Porky’s might not be to everyone’s taste this is perhaps the finest example of the genre and one that is worth checking out.

Special features on the disc include a detailed, if rather indulgent, director’s commentary from the late Bob Clark who tragically died in 2007. There’s also two features: Porky’s Through the Peephole in which Clark reminisces some of his favourite scenes from the movie as well as detailing the production and filming. There is also Skin Classic in which Mr. Skin discusses the impact the movie had on him and the sex comedy genre during the 1980s. There are also trailers for Porky’s and its two sequels; ‘Porky’s II: The Next Day’ and ‘Porky’s Revenge’.

The UK Bluray release of Porky’s appears courtesy of Arrow Video and is presented in 1.84:1, encoded with MPEG-4 AVC and is a full 1080p HD transfer. The reproduction is decent – particularly in daytime and well lit night time sequences with bold colours and convincing depth. It’s worth noting that the original theatrical picture featured a relatively stylized, soft lighting and focus. The high definition transfer remains faithful to this original cinematography. Poorly lit nighttime scenes show up a few small problem areas in terms of definition and graininess however this isn’t a deal breaker. It’s also worth pointing out that this UK region B Bluray release has a different transfer to the Twentieth Century Fox U.S. release. However I personally have not compared the two.

Audio-wise we are presented with the original mono audio track in LPCM 1.0, so there appears to be little to no remastering here. The audio is clear with no distortions or crackles however the original film’s soundtrack was somewhat lacking in dynamic range as is still the case on the disc which makes the audio experience akin to a broadcast television show. Not particularly a problem given the film’s nature.

All in all this is a very competent Bluray release. It’s a riotous movie that should be enjoyed over a few drinks and with a considerable lack of moral policing. If you’re easily offended or expect a more ‘highbrow’ approach to your comedic entertainment then maybe give it a miss.