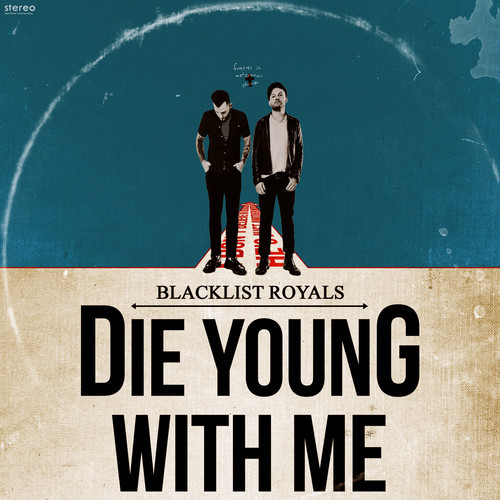 Blacklist Royals – Die Young With Me

Die Young With Me is the second album from young American rockers Blacklist Royals. Energetic and explosive, the Royals take inspiration from punk as well as American rock and blues to form their own sound. The band was formed by twin brothers, drummer Rob Rufus and frontman/ guitarist Nat Rufus from Huntington, West Virginia. But it almost didn’t happen, as Rob was diagnosed with a rare form a cancer aged only seventeen.

It took three years of treatment, numerous side effects and several surgeries including the removal of a lung for Rob to beat the disease. The brothers then moved to Nashville, recorded their debut album Semper Liberi in 2010 and toured extensively for three years. After writing new material, much of which relates to Rob’s struggle with illness, the brothers sought a new label. The journey eventually took them to Los Angeles where they recorded Die Young With Me with renowned producer Ted Hutt (Gaslight Anthem, Lucero).

There is a great deal of variety in this very good eleven track album. While the debut album was largely dirty garage rock, there is far more of a melodic feel here. The vocals are gritty and authentic, the guitars bold and powerful and an ever present organ gives depth. The pace is usually breakneck; the fine closer Take It – Leave It is a good example. But there are slower tacks as well, notably the excellent ballad Twenty Six And Gone, which is one of the highlights.

The album’s opening track Righteous Child starts slowly and builds to a frenzy. Out In The Dark is serious and downbeat, yet the Americana inspired swagger gives it a feel of hope. Skeleton Crew is melodic and flies along, the chanted line in the chorus sure to sound good on stage. The infectious Hearts On Fire has a swirling organ and punk style riffs that work well together and an anthemic chorus that has great energy. And the title track builds on that great organ sound, the lyrics sung with real passion and coming to a climax in grand style.

Die Young With Me is a very good album, bringing together emotional and mature songwriting with a solid performance. If there is catharsis to be found in the power of rock music then a fair few demons will have been exorcised in the making of this album. There is a real power to the music, which comes from both the brutal honesty of the lyrics and the passion with which it is delivered. Blacklist Royals are surely about to burst onto the rock scene in a big way with this release.