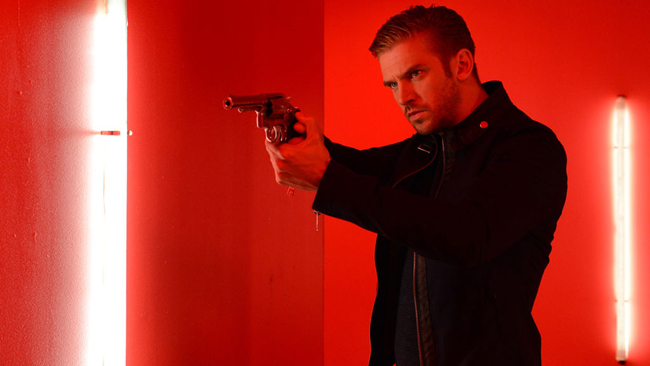 And so the Film4 FrightFest has loomed its head round once again. All eyes were focussed this year as it was announced at an early stage that the four and a half day festival would be moving location away from the Empire Cinema on Leicester Square, London.

The Empire shut down the 1500 capacity main screen in order to chop it in half for the sake of creating an IMAX screen this summer. Initially FrightFest was still going to be at the Empire as they announced onstage at the end of last year’s show – but as the months fell away something changed and a decision was made to move venue.

But not too far!  Along the top of the square in central London is also the Vue Cinema which FrightFest already had a working relationship with for housing their Halloween-All-Nighter.

The announcement was made – but the controversial moment came not by the change of venue – but instead by announcing that the crowd would be split up into three main screens now (The biggest of which would house well below 500 seats). Of course there was an uproar that the crowd would be split between three screens, but it was simply a case of how they could make it work at this new venue.

The format of the festival would remain pretty much the same.  It would launch on a late August Thursday evening with three movies.  The next three days would play six movies on the main screens as well as launch the two Discovery screens for alternative choices. And the final day would rest on the bank holiday Monday playing the final five movies of the festival. The after-party once again then housed at the Phoenix Club on Charring Cross Road.

What was different though was that to work the congestion they had to stagger the start times of the films – but also rotate most of the films around the screens. This meant you would be watching FILM A in one screen, whilst FILM B played in the next screen and FILM C would play in the last main screen. After these viewings the films would then rotate round a screen and then once again before moving on to the next block of three films.

It’s a play that was well designed and for the most part worked very well as it gave people a chance to get response on films they had yet to see should they seek it. This worked particularly well for people who were perhaps thinking about checking out alternative films on the Discovery screens.

What didn’t work so well was timing.  Many of the screenings – including the opener ended up started late (And the closing film started very late as the hosts needed to go to each screen to send people off in person – as they should). It was also clear that the responses from the crowd were much quieter than you would get from the 1500 masses from previous years. That isn’t to say audiences were mute. There were laughs and guffaws where they were needed, but it was clear that this wasn’t like it had been before.

Elsewhere onsite the main bar area upstairs was a decent congregating area that didn’t get too over-populated.  Again this was helped by the staggering of the start/end times of films. Plus people will go out to eat and drink at some of the local drinking establishments. But the bar area is clearly where the guests came to (but all too often would bypass for the “Green” room where they could hide in peace from the fans. There was particular rumblings of Robert Englund hiding from fans with his entourage that would decline fans access to him. But this was sated when Englund spent a good deal of time outside the cinema literally signing memorabilia for anyone.

I guess having the guest hidey-hole located right next to the bar wasn’t helping. Knowing that there was a talent you wanted to approach or even just see mingling with the crowd (As you more than often got at the Empire) was perhaps a little frustrating for fans. But everyone has a right to put their feet up – especially after having just come off a media wall shoot, interviews with various media outlets all asking similar questions, and then having to introduce your film to not one, not two, but three audiences in the space of 30 minutes can probably call for a bit of peace and quiet.

Speaking of the media wall – it was places in the largest area they could find on the ground floor. And while there was room for people to come in and out, there was barley any room for photographers in particular to move around as they had a wall behind them as well. But that’s their (Our!) problem. Sometimes there would also be a crowd on one of the sides as fans waited for a chance to get access to talent again.

The Cinema Store were on site as always and picked a good spot at the top of the first floor escalator with all the usual array of toys, books, discs and T-shirts for sale – and as per usual they prices were of the sky-high variety.

And so onto the films themselves then for day 1:

The opening film for the festival was announced via the usual PR ahead and was met with a fairly enthusiastic response as it would see the return of director Adam Wingard. Wingard had become a festival regular over the last 5 years with showings of A Horrible Way To Day, V/H/S & V/H/S/ 2, The ABCs of Death as well as last year’s crowd pleaser You’re Next.

The Guest is a further example of Wingard as a director to watch. He has tried various sub-genres of horror now and here steps further away with this thriller about a war veteran who visits with the family of a deceased brother in arm. After being asked to stay with the Mother/Father/Daughter/Son combo he sets about influencing each family member and ever enriches their life for the better (be it improving their work situation, teaching defence against, teaching free will). But it soon becomes clear that this seductive figure (and playing the seductive side is not a problem for leading actor Dan Stevens) is willing to go to the extreme to get the job done and soon the daughter is digging up dirt on him.

The Guest may not have been particularly scary (it isn’t at all), and the plot is fairly predictable, but it’s a terrific mood piece that showcases some wonderful scenes between the titular character and everyone else he happens upon. Stevens makes for a more than worthy leading man and on the basis of this has a very bright future ahead of him given the right roles.

The film also has fantastic choices of music which play well with the rest of the film (Soundtrack CD please!!!).

All in all a different choice for the festival – lacking in “horror” for sure, but no less thrilling.

Sin City: A Dame To Kill For

Sin City 2 was initially going to be playing on the Saturday night, but a last minute re-shuffle moved it to the second film of the festival. And as perhaps the biggest studio film acquired for the festival – Sin City: ADTKF was a geberal crowd pleaser – very much mirroring what the first film had to offer.  Robert Rodreiguez has learnt a few new tricks along the way, but generally it is more of the same style over substance. Josh Brolin, Joseph Gordon-Levitt and Eva Green are the main new leads, and Mickey Rourke, Bruce Willis, Jessica Alba and various others return from the first film. Powers Boothe gets a much bigger role as the big bad in a couple of the segments with Green and Dennis Haysbert chewing the screen in the other.

Sin City 2 at 2 hours is the longest film at the festival on the main screen. Mercifully most films ran close to the 90 minute mark.

As per every other year – we tend to skip the last movie on the opening night – purely for the sake of being still awak come day 5. We also didn’t get a chance to see Zombeavers on a screener before hand – so we have no response for this one.

FILM OF THE DAY: The Guest