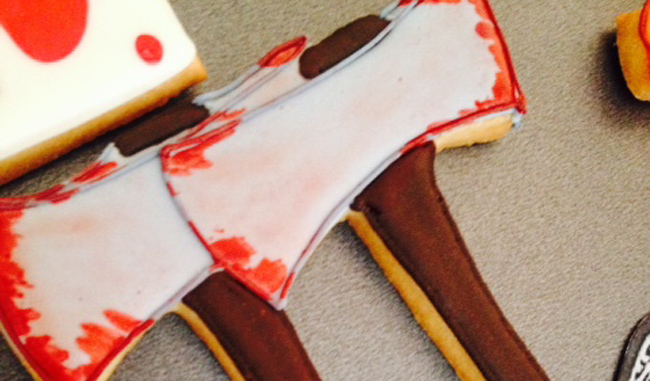 After last years successful run of horror pastry at the 2013 Frightfest  courtesy of Bernadette Box (see here) we asked her kindly again if she wanted to have another run at it. And well – a busy woman that she is she relented after much tugging and did a small selection for this year. Here’s a few preparitoy photos she sent us!

You see Adam Green above with is Hatchet II Biscuit in a fancy boc. Here you can see the early stages of the biscuits being made.

More shapes and designs with some paper references that Bernadette follows

It would hav ebeen rude not to make one for each of the hosts. This year they get name tag biscuits!

A design of the Alan Moore character from Show Pieces sent to us.

And this is the finished product!

A design of the Clown from Show Pieces.

John McNaughton was handed this one to celebrate Henry: Portrait of a Serial killer.

Of course here is Adam’s Hatchett II up close when finished!

The lady herself poses with festival directors Greg Day and Ian Rattray with their gifts.

and an overjoyed Paul McEvoy poses with Bernie with his.