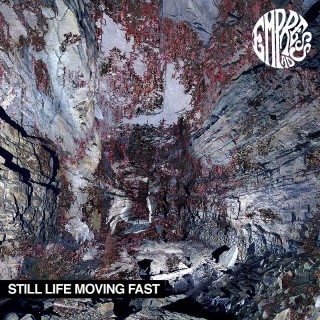 Still Life Moving Fast is the hotly anticipated debut release from Empress AD, a band who’ve truly ran the circuit to it’s core, in waiting for the right way to release their phenomenal first album. After one listen, it’s easy to say that this record has been worth the wait.

The title tracked opener leads into single ‘Invisible Conductor’, and it’s clear to see straight away that this is a record. Not a collection of singles and some filler, but that the four piece have brought forward a piece of art, to be enjoyed together and as a whole. Each track moves silently and swiftly into the next, forever entwined as Still Life Moving Fast tells it’s own story, whatever you make it out to be.

While some tracks, such as ‘Deeper In Disguise’ and ‘Blurred Perception have been around since the record was initially recorded last year, the stand out tracks are the ones that they’ve kept hidden from the public. ‘From Where I Cannot Reach’ creates its own atmosphere and holds you in, gripped by Ollie Loring’s long reaching vocals. And ‘On My Return’ adds more to an already enveloped record.

This is not to take anything away from the singles, as the afore mentioned ones glistened just as bright. But the album’s highlight may be it’s closer, ‘Consumed’. Slow beginning, it beams the same light that ‘Nostalgia’ did from their very first EP. But, what ‘Nostalgia’ had, ‘Consumed’ builds on and turns it into something else. Something completely different, while still the same.

It’s easy to say that a band are ‘the future’ of their particular genre, but it’s very hard for a band to live up to that hype. Empress AD have gained this title on the back of their debut, lets see them live to it.