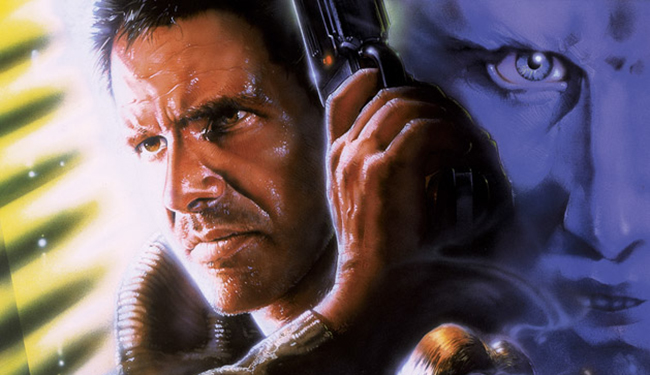 Titan in recent times released not one, but two books focussing on the art of Drew Struzan. It seems apt then that they expand their collection and focus their attention to John Alvin – another paint poster artist who designed and developed many well known Hollywood poster arts.

The cover of the book focuses on the “hands touching” poster from ET  which should be an indicator right away to how high up the chain Alvin worked,– but there are so many more examples throughout.

Long before ET he did work on Mel Brooks films like Blazing Saddles and Young Frankenstein (both in 1974) which are as far removed from the symbolic posturing of ET. Alvin is also responsible for the the original Blade Runner poster that was used upon release (Not the rejected Stuzan version used for the Final Cut). There is a page spread on the various designs that he did initially before amalgamating his ideas together into the final poster.

His work for Disney also stands out as some of the proudest work he has done (Aladdin, Beauty and the Beast, The Lion King).

There are various projects have various designs (often unused – see The goonies) which show you the thought process involved when designing the posters as well as the varied looks a film poster will go through (Willow, Darkman, Batman, Star Trek VI, Jurassic Park). And of course there is a section of his work he did for various Star Wars projects.

The book is authored by Andrea Alvin and includes a forward by Jeffrey Katzenberg. Titan have priced the book well, it’s a real page-turner and will undoubtedly leave fans wanting more come the closing pages. Perfect for coffee tables, perfect for image art fans, and perfect for movie hounds.