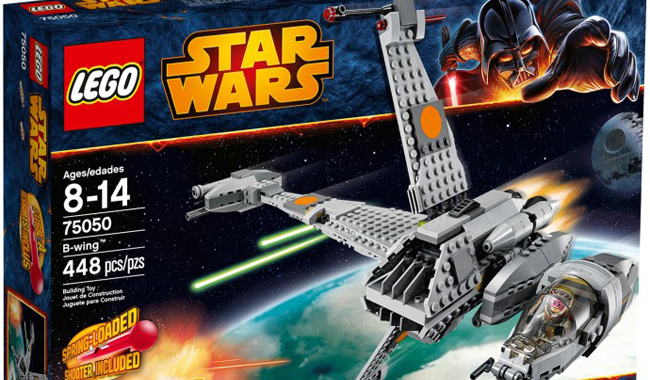 For the second wave of sets from 2014 Lego has gone back to the original trilogy and created some long awaited and memorable sets that are bound to be popular particularly amongst the adult fans. The B-Wing is probably the least popular of the lot, being a ship that only appears in the battle at the end of ‘Return of the Jedi’ in scenes that are overshadowed by what is happening in the Death Star and on Endor at the time. Nevertheless, the B-Wing has always been featured among the Star Wars toys and Lego is no exception.

Only last year Lego released the 10227 B-Wing Starfighter Ultimate Collectors Set (UCS). The UCS B-Wing was, like the latest X-Wing, an oversized set aimed at collectors. However, unusually the B-Wing was not a massive hit and has already disappeared from the shelves of the Lego Stores while older UCS sets like the X-Wing (10240) or even the Death Star (10188) from 2008 are still on sale.

So clearly the B-Wing is not a memorable enough ship for the collectors, but it is still a nice looking ship in its own right. So this time Lego has made a low cost version of it with more playability and appeal for the new generation of Star Wars fans.

The set includes three minifigures. None of the figures are really key figures from the Star Wars universe but all of them are unique to this set. Once again, the quality of the figures is nothing short of amazing in detail. First is a generic B-Wing pilot. He is fully printed in body and legs and has a nice custom printed helmet. His face has a visor printing on one side and a plain face on the other should he wish to take the helmet off. The printing on the body and legs reminds me of a modern fighter pilot getup with various pockets, belts and hoses that continue seamlessly between the upper and lower body.

The second figure is General Airen Cracken. In the movies Cracken’s only appearance is during the final battle of ‘Return of the Jedi ‘ where he can be seen serving aboard the Millennium Falcon. The figure itself is a fairly plain Rebel Alliance officer type. The beige brown uniform has been nicely represented again with full printing of the torso and the legs. The face is quite serious for a Lego figure and includes a nice hands free microphone print on one side completing his look from the movie.

The final figure is Ten Numb, a named B-Wing pilot from’ Return of the Jedi’ serving as Blue five during the Battle of Endor. Ten Numb wears a similar suit to the other B-Wing pilot except in red. He also has a different style helmet, this time with an open chin section showing his distinctive facial features. Ten Numb also has an alternative face with an oxygen mask on.

The build of the ship is separated into five stages which at first seems a little excessive for such a small ship with less than 500 parts. The sections do make sense though during building with two bags dedicated to the central body, one for the cockpit section, one for the large wing and the last one for the two smaller opening wings.

The engine part of the ship has some nice detailing with innovative use of parts to create the look of the engine intakes on a relatively small scale. As in the films, the cockpit section is able to revolve so that the ship can fly ‘upright’. The smaller wings can also be opened and closed on hinges.

In order to pull off a ship of this type, Lego is really showing its mastery of the modern building techniques. No longer do pieces only work from ground up but technic pins and corner pieces are used to change the direction of the studs allowing for the realistic look. This introduces some nice building techniques for younger builders though nothing revolutionary for the more experienced fans.

The finished ship is definitely a little small in scale compared to the other ships done by Lego at a similar price point such as the X-Wing (9493), The Millennium Falcon (7965) or even the A-Wing (75003). However, this does mean the ship has a lot better playability than say the Falcon which is too heavy and cumbersome for children to at least swoosh around. Despite the moving parts, the B-Wing is also surprisingly sturdy and should survive most play sessions.

The ship also includes the new style flickfire missiles which shoot out surprisingly powerfully from the model. Luckily the missiles made of red see through plastic are themselves large enough with a nice rounded head to avoid any injuries from accidental launches and to minimise the possibility of losing them.

Clearly the model is not ideal for display and can only really sit on its side due to lack of a stand. As mentioned though, this has clearly been designed as the very opposite of a display model. For adults then, there is very little here to excite. General Cracken and Ten Numb are unique figures that do appear in the films, so the completest  minifigure collectors will want them, but the ship itself will be much better appreciated by younger fans who want something they can actually play with.

The price point is perhaps a little high for this size set but that should not come as a surprise considering the Star Wars licence.

Overall, I think this is a good set that makes a lot more sense than the much more expensive collectors’ edition from last year. So one for the children, but luckily there are a few other sets in this run which have much more appeal for the adult fans over the coming months!