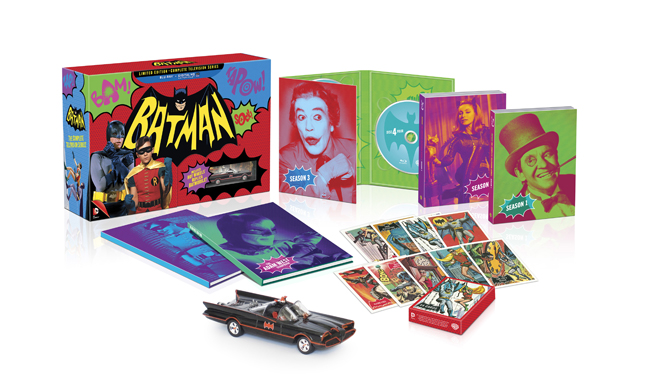 Batman: The Complete Television Series features all three classic seasons of the fan-favorite show, including all 120 original broadcast episodes completely remastered, as well as over three hours of never-before-seen enhanced content including interviews with both Adam West (as Batman) and Burt Ward (as Robin). In addition to favourites West and Ward, the series featured a long list of notable guest stars and cameo appearances over the course of three seasons including Julie Newmar, Cesar Romero, Liberace, Vincent Price, Burgess Meredith, Bruce Lee, Sammy Davis Jr. and many more!

will be individually numbered, making the set a true must-have for both fans and collectors alike. The set will include sought-after premiums including:

“Fans around the world have been clamoring for this release for decades,” said Rosemary Markson, WBHEG Senior Vice President, TV Brand Management and Retail Marketing “Warner Bros. Home Entertainment is beyond thrilled to make the caped crusader’s fans’ wishes come true by releasing Batman: The Complete Television Series to Blu-ray™, DVD and Digital HD for the very first time since the original 1960s program. Coinciding with the 75th Anniversary of Batman’s comic book debut, this is the ultimate holiday gift.”