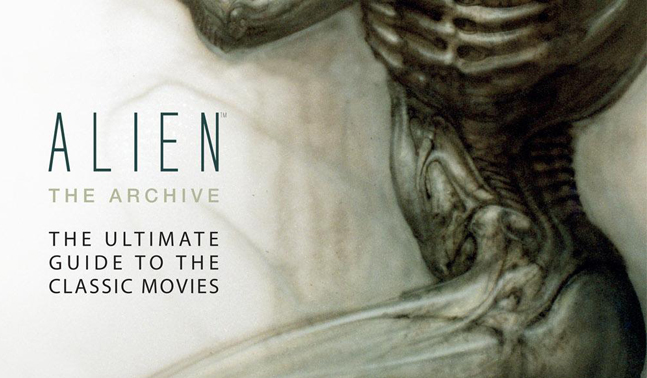 Calling itself ‘The Ultimate Guide to the Classic Movies’ is no exaggeration as this 315 page, A3 colossus of a book is exactly as it describes itself.

Each film has it’s own dedicated section with a thorough introduction that covers pre-production through to post-release and the impact of the film. Going all the way back to 1979, we learn how Dan O’Bannon, the script writer, came up with the idea, and how Ridley Scott eventually came by it. Details on Scott’s insistence of Giger’s visionary artwork and character design are all fleshed out and how the success of Scott’s ‘used future’ aesthetic which would become the norm for sci-fi.

There are pages of sketches from concept artists including Giger, as well as stills from the film and marketing shots. Rather than being thrown in, they are thoughtfully chosen poses that give an insight to the casting and character. Concept work on the ships, asteroid and costumes are all annotated and the level of detail on something as innocuous as the uniform insignia and symbols are all detailed on this pages. There are at least five spreads of stills from the film devoted to the Space jockey, as well as Giger’s work on the models.

This book simply has everything in it and they’ve really raided every designer’s archive to bring together this book. One of my favourite pages was a picture of one production designer’s wall that is covered with at least 60 drawings of ships and equipment. You really are getting an insight into not just the film set, but the offices of those who worked on the film and how they worked.

This edition, that explores every facet of the genre and pays a sincere homage to Giger, will enthral fans of sci-fi. As the Alien franchise never seems to diminish in popularity I can see this being the definitive go-to Alien bible. For fans of Alien there is simply no doubt this is the must-have accompaniment to the film.