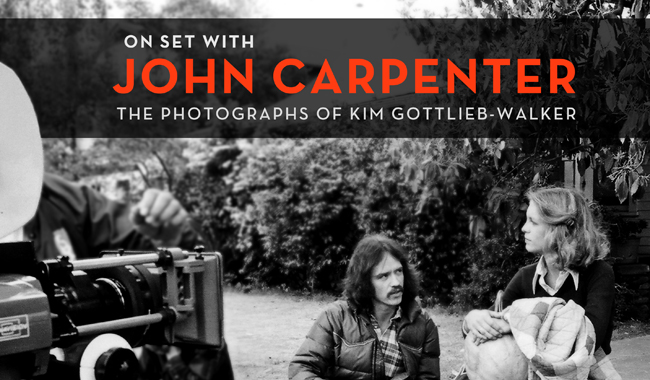 On Set With John Carpenter Review

On Set With John Carpenter: The photographs of Kim Gottlieb-Walker

This is a collection of set photography from a photo a artist who worked on several early Carpenter flicks. Five films are covered in depth here: Halloween, The Fog, Escape From New York, Halloween II and Christine.

It starts gloomily enough with an iconic shot of Michael Meyers looking down from above, knife in hand. But then on the opposite page as the opening to the Halloween chapter there is also a pesky Carpenter playing hide behind the curtain!

Walker gives her educational background that lead into her role as onset photographer.

She introduces each film at the start of each chapter and then follows a selection of stills from each film (she claims to perhaps have taken between 3000 to 5000 per film!) and there is accompanying text from various cast and crew who were there at the time, or in the relevant still themselves.

You get to learn a bit about the process not just of the photographer, but also of the director as well. Carpenter might shoot a scene and then let Walker get in there to redirect it herself to get the matching shots for publicity purposes.

But as well as publicity shots, there is a whole host of working behind the scenes and goofing around shots that liven the book and give it a real collective. All of the key players are present (also look out for matte painter James Cameron on set of Escape From New York).

The shots are largely black and white and it is astonishing just how atmospheric some of them can be. The photographs chosen to open each chapter of the book do well to promote the feel for the particular film in question: The aforementioned Meyers looking down; A hand through a backlit doorway coming towards the lens surrounded by a bright fog; A close up of Snake Plisken in the dark with the light given his one working eye glow to it.

It’s a shame that it is such a limited window of time that Walker worked with carpenter. But there is no lack of material on the films that are covered.

This is an interesting book for anyone who likes behind the scenes photography generally and is interested in the various viewpoints given in the quotes included. Depth is never really dug in the words though – like any good book of photography – it lets the pictures do the talking.