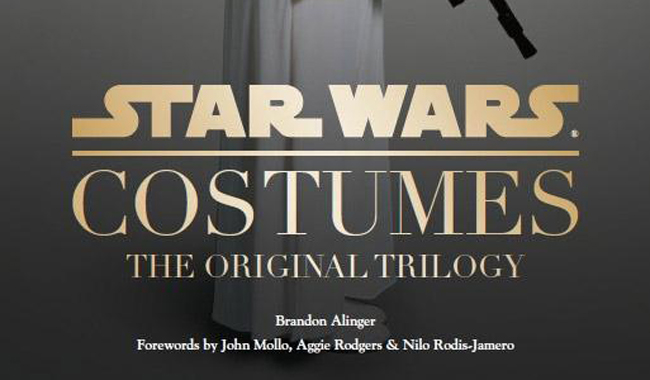 Is there no area of the Star Wars universe that Titan Books isn’t willing to cover? Thankfully, no. We’ve had blue prints, vehicles designs in recent times and now it’s time to take a look at costumes in this tall volume.

As the cover suggests this is going to be Original trilogy only territory. The book takes a look at the three films in chronological order.  Often characters appear more than once in each film. The obvious choice is of course Princess Leia who gets to adorn a variety of outfits that show up just about every side of her character: The diplomatic, the mysteriousness, the sexiness and also as battle-ready warrior.

Episode IV focuses mainly on the leading characters in the film with nods to the Imperial Officers, Storm troopers and Jawas. It’s a shame only a couple of pages are devoted to the cantina as it was a scene that was full of colourful and interesting characters.

Each costume has been unpacked from storage and laid out in the parts that it comes in.  Just see how many parts Anthony Daniels had to put on for C-3PO, or the confined space that Kenny Baker had to work in inside of R2-D2.  There are also plenty of dressed up shots of outfits on mannequins – as well as shown through still footage from the time they were used.

Episode V has a more expansive set of costume designs as the film was that much bigger. But again like the previous section, there is a missed opportunity – this time with a short section given to the supporting bounty hunters. Thankfully favourite Boba Fett gets a good part to himself including a foldout section.

Episode VI follows through with a linear look through the stand put characters and costumes. Again completists will perhaps miss the myriad of characters that adorn the palace of Jabba the Hutt that are not covered, but like Episode V, the final instalment (so far) is expansive for the universe and covers designs selected in depth.

We can only imagine Star Wars Costumes for the Prequel trilogy will be eaten up largely by what Natalie Portman wears (in the first episode alone!). What you have here is a comprehensive collection of images and sketches detailing character design and fashions that is likely to have fans calling out for further editions on the prequel trilogy.