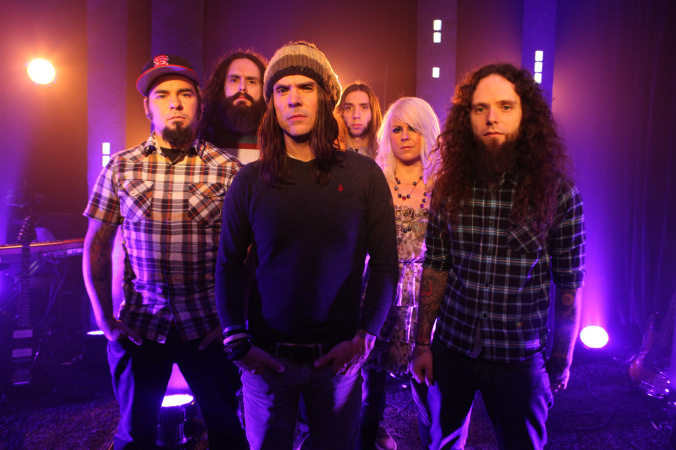 We caught up with Canadian altrock sextet Your Favorite Enemies to find out more about their ambitions for world domination, what it is to be Canadian, their new album and what the hell they’re playing at buying their own church. Bloody rock stars…

1) Hello YFE thanks for taking the time to speak to us – we hear there is a roaring music/creative scene in Canada at the moment, tell us a little bit about being Canadian and how it’s shaped your music, if at all.

We are from Montreal, Québec, which is a place blessed for having both the French and English heritages as predominant cultures, but that’s also been greatly influenced and impacted by the unique essence of all the different cultural groups who forged the very distinctive nature our community over the years. So that very particular amalgam of colors is greatly inspiring for us and for any other artist coming to Montreal in order to commune through such a gathering vibe and collective spirit.

2) You’re shifting quite a lot of units for an alternative act in an age where record sales are notoriously difficult – what’s the secret?

We are crazy rich, so we give away our album to anyone writing to hohoho@northpole.com around Christmas time every year, so it might have impacted our sales number a little bit somehow LOLOLOL… Nah, we are not rich! I wish I was, so I wouldn’t be stuck with those guys in a van all year long, but that’s another story! Seriously, “sales” are some kind of intriguing monster to define, neither is it easy to explain, especially for us, if not for the fact that we have been very fortunate to find our “people” at an early stage of the band’s existence. What we built with our people over the years has been tremendously defining, so that’s how we are looking at it. The rest of it is business and since we are only musicians, we don’t know nothing about it, maybe that’s the real secret after all.

3) Your new album Between Illness and Migration is out next month. Do you have a favourite song, and if so, why?

It’s always difficult to pick one track, as every song has been the result of a true moment we shared all together… but I guess the album’s heart and soul could be defined by the songs “Empire Of Sorrows” and “From The City To The Ocean”… both tracks have the multi-layered elements of noise, prog and psych rock that define the band’s sonic identity and lyrically have the personal outline of symbolistic spoken words poetry… many words to say, it’s noise rock with defying soul.

4) You’ve had support internationally for the band for a while now, was it a nice surprise to “break out”?

To this day, to be honest, everything we live and experience is a “nice surprise”, as we never actually gathered all together to set ourselves a 5-year plan to “conquer” the word or purposely whore ourselves in order to emulate someone else’s “success”. Everything evolved organically and we never changed who we are nor our perspectives in order to adapt to the whole business circus of it all. Doing what we love, with the people we love and based on the way we want to do it is an incredible privilege. If it wasn’t for our lead guitarist being super annoying it would be perfect, so little piece of advice, read carefully any contract you are pushed to sign or you’ll end up being stuck with a strange person in your band (don’t worry about Sef’s feelings, he doesn’t know how to read, so he won’t know that I don’t like him very much.)

5) How was the Japanese tour? Did you manage to experience any of the oddities of the culture?

Japan, in so many ways, has always been home for me. I mean, from the stand point that our people invited me to visit Japan before we actually had the opportunity to play our first concert over there was completely surreal. Like the rest of the band members, I come from a very financially challenged background, so to be invited to Japan was more than a touristic moment for me, it was like breaking a cycle of emotional isolation and offering me a redemptive experience to everything I ever heard growing up in a very tough neighbourhood. Every time we tour in Japan is like going back home… and the last tour was incredibly uplifting as instead of using fast trains like we usually do, we toured the country with vans, so we could have another perspective of this very incredible country and take more time to share with the people. And seeing Moose and Ben (the band’s drummer and bassist) who cannot stand sea food in a thousand miles distance eating an entire raw squid was simply priceless! So I guess some of us had quite a unforgettable experience of specific cultural oddities! As for me, it was in China with snake soup and cockroach crackers (WHAT?!?)

6) Alt-rock seems to be in rude health right in the UK with Royal Blood and Marmozets leading the charge for new bands – are you part of the kick back against sanitization?

We had beards and long hair before it became trendy for unbearded dudes to have beard surgery (true story… wtf), so I guess by some cosmic chance and some total random luck we might be included in some kick back against sanitization rock movement. We are just happy that we didn’t have time to learn how to look cool playing mono-synth and playing floor toms wearing light green faux leather overalls, fuchsia spandex pull over and some equatorial wood clogs before it was considered being a “bit” off (it’s off now, right? because if it’s not, we might have antagonized half of the MGMT’s crowd… we love you people… we are lovers and hate is wrong… let’s unite together under some fluorescent unicorn statue made of magic flowers and glitters from planet fun… ) … oh and about the question, we’ve been part of many kick back against stuff recently, so I guess it’s good… somehow.

7) As a bit of a video games nerd I’m impressed by your Final Fantasy score inclusion – any more in the pipeline? Did you take inspiration from the franchise for the music, or did it becomes its own beast?

Ben is a Final Fantasy FANATIC, so going all over the process with him was like working in some Velvet Underground rip-off band with the number one fan and encyclopaedist of that band… we all have a friend like that “yes, but Lou Reed was drinking butterfly tea when he thought about the idea of maybe doing or not something” – kind of fanatic…but no, it was fun. Ben was super ecstatic when he knew we would be writing the score for a game that’s been incredibly influential on him as a person (I didn’t know it was possible, maybe I should stop playing Donkey Kong on Playstation 1). We had the chance to play the game and to see some images before the game was released, but I didn’t want to see any of it. I knew the story and it was enough for me as I didn’t want to be so specifically writing about the game that it would ruin the imaginary elements that are so intrinsically involved for the fans of such an iconic game. I wanted every player to define their own experience and not be trapped in my own perspectives. Even for the lyrics, we purposely chose to have the same lyrics for the 3 tracks. The songs were evolving through the game with the player and not dictating the experience, and the fun part that comes with being involved in the creative part of such game is the fact that it’s impossible to have lukewarm reactions. A guy even sent me a message saying he would track me down and kill me for having said that I didn’t play the game before writing the music! I guess he didn’t get the idea of letting him define the music’s soul. I won’t make that mistake if we are writing the next Mario Bros or ping pong game! I might actually get shot by people eating mushrooms and kicking rocks with their head to collect coins next time! Better be safe than sorry!

8) You’ve bought a church, naturally. How’s the empire coming along? (plug away)

Let’s put it this way: it took us a year to negotiate. No one wanted to finance some crazies looking to buy a church in order to turn it into some music studio. Once our proposal “received” (they insisted on the word), we had to be cleared by at least 12 levels of decision-making authorities. When we finally signed the contract of “acceptance”, we decided to give the community 2 extra months so their parishioners could take the time to mourn and live their grief, only to be exposed on the local paper first page the second we actually integrated the church with an headline that read : “Punks are taking over the church, there goes our community’s peace and faith”, written in red over a picture of the band and little image of the church. So yes, it’s been an amazing experience. But the place is AMAZING and we do have a better access to the confessionals, which is good after touring! And we resisted the temptation to put the band’s flag on the very high pole outside! Next headline: “they weren’t only punks, they are also pirates, lock your doors and hide your children!”

9) You’re touring this November with the annoyingly long named AYWKUBTTOD (great band though) – what can we expect from the live show?

I know, long band names suck. At least Your Favorite Enemies can be called YFE, right? And that’s why we wanted to tour with a band having a short name like “Fun” or having one of those band with cool and trendy words such as Beach, Moon, Bear, encyclopaedia, taxidermia, blood or pastel. But hey, at the end of the day, we don’t always get what we want, so we are grateful to play with Trail Of Dead, knowing it will be all about sharing a real moment (“Trail…” also play their own instruments without backup tracks… yeah, we are also that kind of adventurous band) and about communing the whole ramification of the term “Noise Rock”. It’s usually really loud, bearded (not the trimmed kind… but Beard with a capital b) and intense as if Jerry Lee Lewis was beating the shit out of fat elvis (the old elvis, because we all know that young Elvis did the army… we are brave, but not crazy)… something like that…

Sorry guys, we seem to have misplaced your invoice…