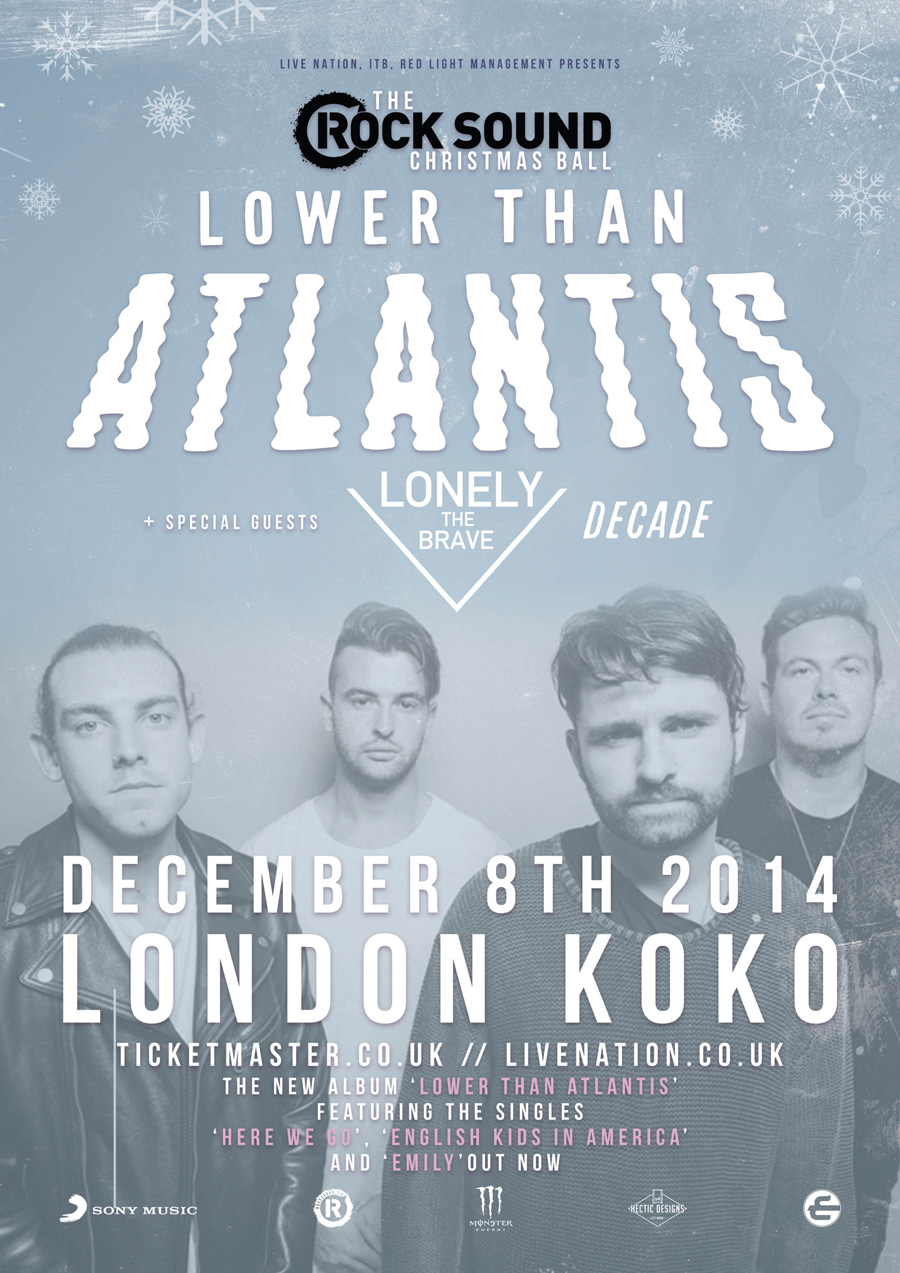 2014 was a big year for everyone on tonight’s bill. An end of year bash, a big old fashioned Christmas do, and first on stage were Decade, wearing appropriate light-up jumpers. Kicking the night off with ‘Callous’, the young five piece showed that they’re more than capable of holding their own in a venue as big as the Koko.

With more energy than a litter of puppies, Decade hopped around the stage as enthusiastic as ever and got the entire crowd up to the level needed to enjoy such an evening. Other tracks from their full length stood out, such as ‘Fools Gold’ and ‘Brainfreeze’, while set closer ‘British Weather’ was a decent attempt at stealing the show.

Lonely the Brave stepped up to the plate, and were almost polar opposites to the previous band – not in lack of quality or talent, but in their ethic. While Decade were interacting with the crowd and bouncing around, Lonely The Brave were all about the music and the emotions. Frontman David Jakes was hidden in the back with the drums, while guitarists Ross Smithwick, Mark Trotter and bassist Andrew Bushen were up the front of the stage.

This hindered nothing, as the song’s from their recent full length, The Day’s War, sounded huge. ‘Trick Of The Light’, ‘Backroads’ and ‘Call Of Horses’ in particular were memorable, and it’s easy to see that these guys are about the product of their efforts more than anything else. A class act, and one we’ll be hearing a lot of in 2015.

But the evening was always going to belong to Lower Than Atlantis, who were superb. On the back of their self titled release, one which has already featured high in many end of the year lists, the guys were visceral in their approach to the show, and it showed. Their set spanned their career thus far, with some fan favourites making their way in there with the hits and singles.

A live debut of ‘Merry Christmas (Where Ever You Are)’ was in order, while older songs like ‘If The World Was To End’ and ‘High At Five’ caught the attention of the mosh pits. Newer tracks with big choruses were sure fire hits, the likes of ‘Emily’ still ringing in the higher orders of the Koko.

‘Criminal’ was filmed for an upcoming music video, while ‘Ain’t No Friend’ got the biggest response of the set. A three song encore concluded with ‘Here We Go’, and then it was done. Hat tip to drummer Eddy Thrower, whose antics on the drum kit were louder and more ferocious than previously heard, while frontman Mike Duce was on top form with the adoring crowd.

2014 was a big year for everyone on this bill, with each band releasing a seminal record. But none more so than the headliners, as Lower Than Atlantis have proved that they’re ready to take on the world. They’ve just announced a tour for next year, miss it at your peril.