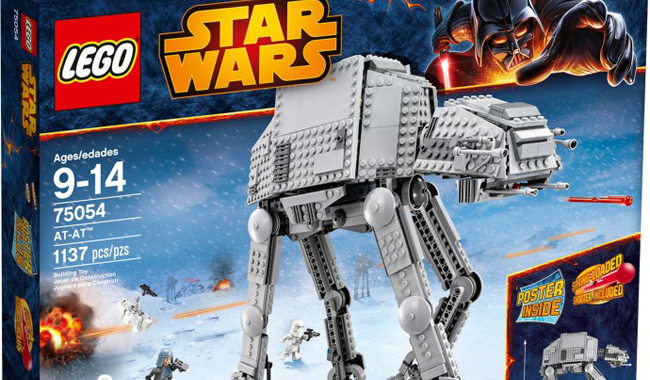 The AT-AT is another unforgettable vehicle from the Star Wars films. These massive four legged ground attack vehicles inspired awe as they first appeared over the horizon in the battle of Hoth at the beginning of The Empire Strikes Back. The Hoth appearance is clearly the battle depicted in the set with the inclusion of the Snowtroopers as well as the separate Snowspeeder set in the same run, used by Luke Skywalker and the Rebel Alliance to battle them in the film.

While the Mos Eisley Cantina set was a minifigure showcase, in this set the vehicle itself is the star. The AT-AT, while not in minifigure scale, is a good size and displays well alongside the numerous other Hoth sets that have been released in recent years.

The minifigures included are General Veers, the commander put in charge of the attack by Darth Vader who can be seen in the film alongside the AT-AT driver and the Snowtrooper commander inside one of the AT-ATs. General Veers has a fully printed body and helmet that gives a good likeness to the films. The driver has a fully printed body and legs giving an excellent likeness to the film costume. The helmet however is gray as opposed to the white in the films, presumably to differentiate from the normal Stormtrooper helmets. Finally we have three Snowtroopers. The body of the Snowtroopers is the same as in previous sets. The legs are still not printed, but we have a what looks like a skirt made of fabric around the legs to depict the long coats the troopers wear. The back packs are also new, this time brick build with a printed 1×1 tile to depict the back pack details. The helmets are also new. This time the eyes are printed black instead of having actual holes. While this seems like a step back, it does allow a normal printed head to be used underneath instead of the old style fully black head piece. One of the three has small rank insignia printed on his chest designating him as the commander as seen in the film. The rest of the figure is identical to the other Snowtroopers.

The unfortunate truth of this style vehicle building is that around half of the build ends up being the four legs which can be rather repetitive. The build starts by creating the central ‘belly’ section. This unsurprisingly consist of a lot of technic pieces and is left hollow to allow the snowtroopers to travel inside. The front and rear end including the corners have been innovatively made with plates on hinges. This leaves the body a little weak to handle, but the resulting shape seems perfect as it is able to create angles that would be otherwise impossible in the Lego medium. The four legs are all identical and have ‘hip’ and ‘knee’ joints while the foot section is loose. This allows several different styles of pose for the AT-AT which all look good. In fact the only thing that would look unnatural is if the legs were left completely straight. The final section is the head. The build of the outside of the head seems quite fiddly with again loose plates being hooked up by technic pins. Again though, the result is superb and gives the best looking Lego AT-AT so far.

The design of the AT-AT is therefore very good overall. I was also glad that the instructions made it clear from the start that the four legs would be identical, therefore allowing for simultaneous build, rather than finishing one, only to start the next one again. The body and head designs are very well thought of giving a very nice shape that is close to the real thing from the films.

As pointed out, the AT-AT looks great as a display piece. The nature of the four legged vehicle is that it will never be very sturdy, but that does not mean it is not suitable for play. It certainly isn’t for the smallest fans as indicated by the age range, but it is also not so fragile that it could not be played with. The body and head can all be opened for access, but there is very little detail inside. Particularly the cockpit is very sparse, although it does allow the single driver to sit while General Veers stands behind him. The belly section also has a hatch, presumably for the troops to use that can be operated from the rear of the vehicle. As mentioned, the legs can be posed in various positions, but they are not loose enough so that they could easily be moved as part of play. It is therefore advisable that one suitable position is found where the AT-AT stands stable and then left there.

The head also has two of the new style flick-fire missiles that use a spring loaded mechanism. Thankfully these have been installed underneath the head so that they do not look out of place on the finished model.

All in all, the AT-AT is a great Lego set, and the best looking version released so far. The scale is large enough to look good while still keeping the set cost at a reasonable level. It must be noted, that there is a wonderful minifigure scale unofficial version for which instructions can be found online (search for Cavegod AT-AT), but this requires more than 6,000 pieces to build! For the rest of us, the 75054 AT-AT will make an excellent display model that also does not take an excessive amount of space to keep. At a little over £100, the price is also pretty decent for this size set and pretty much follows the usual 10 pieces per £1 formula.

So another great set in the latest run of Star Wars sets. This 2014 run is turning out to be one of the best so far and should at least cause some problems when planning those all important Christmas lists!