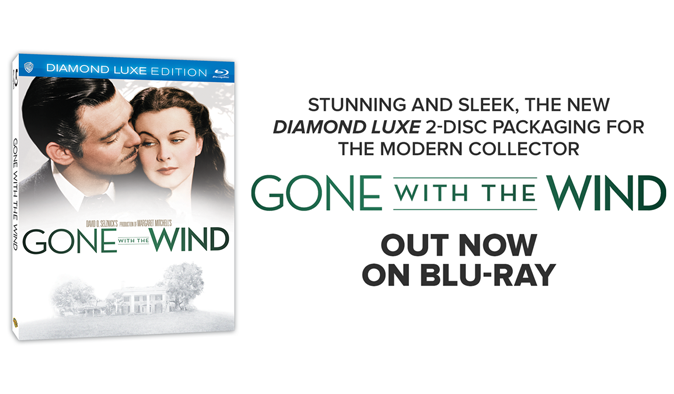 Win Gone With The Wind on Blu-ray!

Visually stunning, sleek, contemporary packaging to appeal to the modern collector, Diamond Luxe Editions are built with a revolutionary lithographic material for an unprecedented hyper­glossy finish including a hidden magnet that maintains a secure, yet soft closure.

Period romance. War epic. Family saga. Popular fiction adapted with crowd-pleasing brilliance. Star acting aglow with charisma and passion. Moviemaking craft at its height. These are sublimely joined in the words Gone With The Wind.

This dynamic and durable screen entertainment of the Civil War-era South comes home with the renewed splendor of a New 75th-Anniversary Digital Transfer capturing a higher-resolution image from Restored Picture Elements than ever before possible. David O. Selznick’s monumental production of Margaret Mitchell’s Pulitzer Prize-winning book can now enthrall new generations of home viewers with a majestic vibrance that befits one of Hollywood’s greatest achievements.

The Diamond Luxe Edition is available to buy from Zavvi today: http://bit.ly/1zQIp10

To celebrate the release of Gone With The Wind Diamond Luxe Edition, we have a copy on Blu-ray to giveaway.

To be in with a chance of winning check this question out:

What year was Gone With The Wind released?