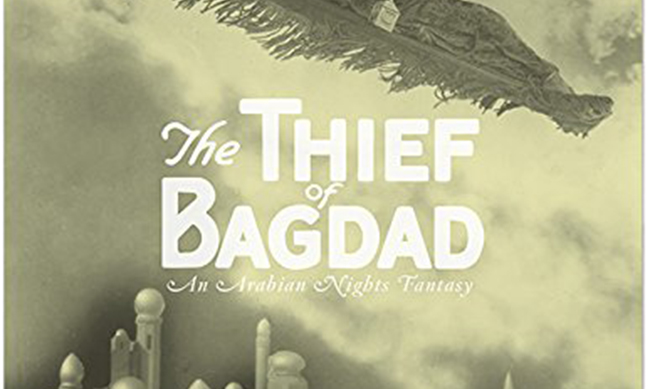 The Thief Of Bagdad Review

Made in 1924, The Thief of Bagdad was a defining moment in both the career of it’s director Raoul Walsh and the films star, producer and uncredited director Douglas Fairbanks. As The Thief of Bagdad is released in the award winning Eureka! The Masters of Cinema series the question must be asked who is the real author of the film given both men’s reputations and legacy. In this case the unequivocal answer to that has to be Fairbanks. In fact Walsh was one of the last member of personnel to be hired on the film. But more on him later. It cannot be overstated and is now forgotten what a member of Hollywood aristocracy Douglas Fairbanks was in the golden silent age of Hollywood. His suave good looks appeared in many an adventure and action film as the romantic lead. It was Fairbanks alongside his wife and actress Mary Pickford, the biggest power couple of their age and Charlie Chaplin who between them formed United Artists, a company set up to compete with the other majors and have the artist in mind, leading one rival to claim the “lunatics have taken over the asylum”, which is said to be the original use of this saying.

The film opens in (a seemingly quiet) Baghdad marketplace. As a man takes to drinking from a water fountain a pickpocket and loiter in the market picks his purse. After a couple of other similar episodes the man escapes using his athletic abilities to get away. Picking pockets Ahmed works for a Fagin-like character who gets him work and pays him for his thievery. He takes his devil-may-care a length further by scaling the high palace walls with the use of an Indian rope he has stolen (the first example in the film of its fantasy elements) where he sees the sleeping Princess. On seeing her all thoughts of thievery are almost forgotten until he is almost caught by a Mongol slave (played by Anna May Wong in an early role) and escapes this time escapes the Princess’s father’s wrath and The Caliph’s guards using his athletic prowess. Seeking a husband word gets out and the thief decides against his better judgement to be a suitor by pretending to be a Prince for far off land. He, in her hands is far superior to the fat and bloated Indian Prince and a cunning older Mongol. The Mongol suspects this other stranger is a fake and usurps him on learning the suitor is to be linked by a foreseen rose. Once the thief is unmasked, the Princess is undeterred and sends all her suitors off to far off lands to bring back most amazing objects and they have “seven moons” to complete the challenge. Ahmed tackles mermaid temptresses, giant underwater spiders and tree people before he makes his escape back to Bagdad on a Pegasus like horse while the Mongol has a magic carpet.

At the age of 41 Fairbanks was already getting on in years to be playing this Bagdadi waif. Indeed on Blu-ray the craggy lines on his face are clearer than ever before. But what is also evident is how buff and well toned the actor is; unusually well ripped for the time. Athletic too he uses trampolines set in large vases to escape his pursuers. However, the other star of the film are the incredible gargantuan sets designed by William Cameron Menzies. Menzies is the other star of the film. The imaginary and fantastical sets by the art designer are at times simplistic but immense in size and it is set that this was he and Fairbank’s intentions to impress the whole of Hollywood and Fairbank’s makes good use of the sets and at times seems to be filling them up. The film is quite long at over 150 minutes and after a dragging start the film is not short of excitement and becomes more jaw dropping as it progresses. It could be forgiven for the poor spfx of the giant underwater spider but what cannot be forgotten is the age of the film and the advancements it made for cinema technology which climaxed in a magic carpet ride with some effective results. An extra on the disc is a 17 minute visual essay showing Fairbanks at play with his costumes and others including Walsh. Raoul Walsh was to a large degree a jobbing director for many years and this was his break as he was largely bought in to tame the star’s budget extravagances. Later on Walsh would have the credit for discovering John Wayne for his first star role in the epic 1930 western The Big Trail before having his golden age in the late 30s and 40s with films starring James Cagney, Bogart and Errol Flynn. For all its cheesiness The Thief of Bagdad is led by Fairbanks with his brash, over confident and assured ego making for one of the greats of the silent age of the 1920s.